The officials from railway and police were rushed to the spot after the collision.

The two trains of the National Thermal Power Corporation (NTPC) collided head-on at Madhya Pradesh’s Singrauli. One of the trains was loaded with coal, while the other was returning empty.

The staff of both the trains are feared to be trapped.

According to the sources, the trains collided after they were reportedly allowed to run on the same track.

The rescue operation is going on, officials said. 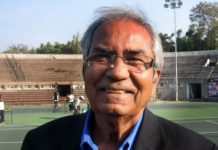