At least seven people were killed after a massive fire broke out at a Covid-19 facility in Andhra Pradesh’s Vijayawada on Sunday morning,

According to police reports, the fire broke out at the Hotel Swarna Palace which is being used to treat COVID-19 patients.

The incident took place around 5am. Fire tenders were rushed to the spot to douse the flames.

According to the reports, 30 people have been rescued from the building.

All the rescued people were taken to a nearby hospital, sources said.

“Anguished by the fire at a Covid Centre in Vijayawada. My thoughts are with those who have lost their loved ones. I pray that the injured recover as soon as possible. Discussed the prevailing situation with AP CM @ysjagan Ji and assured all possible support,” Modi tweeted.

Union Home Minister Amit Shah expressed grief and said, “Deeply anguished by news of tragic fire accident at a COVID19 facility in Vijayawada, Andhra Pradesh. Centre assures all possible support to state govt. Condolences with affected families in this time of grief. Praying for speedy recovery of those injured.” 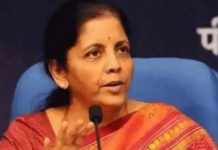