Seven people of a family on pilgrimage were killed on early Friday morning when a bus mowed down them in Uttar Pradesh’s Bulandshahr district.

The dead include four women and three children who earlier visited Naraura Ghat to take a dip in the Ganga river.

According to the reports, the victims were sleeping on the pavement when the accident took place.

All bodies have been sent for post mortem, sources said. 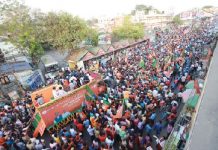