Seven long years have passed slowly. Very slowly. Every morning has brought a rush of painful memories and every night, the shadows of despair have only lengthened. The mornings are particularly stark. That’s the time Shekhar and Neelam Krishnamoorthy’s house use to be abuzz. It was the time when their children — 16-year-old Unnati and 13-year-old Ujjwal — were in a mad rush to make it in time for school.
The mornings still arrive – with painful regularity and now it’s only their pictures that stare at the four walls of the house. Unnati and Ujjwal both died, panting for breath like the 57 others who were trapped in thick smoke in the balcony of the Uphaar theatre on June 13, 1997.
Bound by grief and anger, the families of the victims slowly got together to form the formidable Association of the Victims of Uphaar Tragedy (avut). And they have been fighting since then because the one thought that doesn’t leave them is the fact that their family members could have survived if only the theatre owned by the Ansals had complied with the safety regulations. But commercial interests had overtaken physical safety and extra seats had been constructed in front of the exit door and the screening of the film Border had started sharp at three even though there had been a fire in the transformer the same morning.
Tehelka accessed rare photographs in which the series of criminal violations tell a spine-chilling story. The movie hall proudly displays a broom where the fire extinguisher should have been and the public address system, mandatory under law sat in a corner but without a microphone. Not that the Uphaar staff even bothered to try and evacuate the victims. Instead, its management picked up the cash box and quickly exited to watch the fate of the victims trapped in the gas chamber.

Outside, the hair-raising death dance continued in the public glare. Fire tenders screeched their way to the hall, their sirens giving the first glimmer of hope to the relatives who had started arriving. But they were of little use — the hoses were damaged and the water tanks empty. The ambulances came, too, but only with stretchers and no oxygen. All they could do was carry the dead and add to the heap of bodies that had started piling up at the nearby All India Institute of Medical Sciences. Unnati and Ujjwal lay there, as did Tarika Sawhney. Seven years later, Tarika’s father Naveen Sawhney says, “I can’t sit back and tell myself that her death was part of kismet. It was murder by negligence.”
That is the point avut has been striving to prove for the last seven years. Fired by an accumulative desire for justice, the members have virtually been living out of courtrooms and lawyers offices. There have been moments when they have felt like giving up, especially when in court, the case is adjourned to a future date. Says Neelam, “I sometimes feel like it’s a crime to ask for justice in this country. The accused are given exemptions and allowed to holiday abroad. Their businesses are flourishing. We have lost everything we had and yet as victims we are only being further victimised.”
The will to carry on to “get justice for my dead children or I can hardly call myself their father,’’ as Shekhar put it, has given them some reason to believe in their fight. To continue in the hope that one day — some day — their battle will pay off.

Some of it has. avut filed a civil writ petition in the Delhi High Court and after daily hearings, Judges SK Mahajan and Mukul Mudgal passed a strong order holding not just the Uphaar management but also the mcd, the dvb and the dcp licensing guilty of violations. The court fixed a compensation amount of Rs 15 lakh for all the deceased below the age group of 20 and Rs 18 lakh for those above. While the Ansals were asked to pay 55 percent of the amount, 15 percent was to be paid by the three departments of mcd, dvb and dcp licensing. The Ansals were also slapped with an additional Rs 2.5 crore punitive damage. While the three departments submitted their share of the compensation money in court, the Ansals — through its company Ansal Theatre and Clubotels Pvt Ltd (atcl), of which Uphaar is a part — are dragging their feet on the pretext that they can’t pay the money unless they are allowed to sell the theatre which was sealed by the CBI as evidence for a criminal case which is still on.
The quest for justice has seen a determined avut cross many hurdles. The battle, in fact, has made many of its members into detectives of sorts. Determined to nail the Ansal’s lie about not being able to pay the compensation amount if they were not allowed to sell Uphaar, the members went digging and got hold of a list of other assets owned by atcl. The properties spread over Gurgaon, Ghaziabad and Kolkata are worth an approximate Rs 133 crore. The properties have all been pledged to various banks against which they have got Rs 133 crore. This vital list of properties only gave avut extra ammunition and they have now filed another contempt of court petition against the Ansals. Says senior advocate KTS Tulsi, the association’s lawyer, who is fighting the case free of charge, “They continue to behave as if they are a law unto themselves. They keep transferring their assets to other companies owned by them but our case is strong. Government departments conspired with them and tried to sing to the tune of a big business house but this case represents everything that is rotten with our system.”
There is another lie that the association is now seeking to nail. In a sworn affidavit to the court, the Ansals stated on a sworn affidavit that Uphaar could be sold as it was free of all legal encumbrances in March 1996. Documents in the possession of Tehelka clearly show the theatre had been mortgaged right upto July 2003.

Like Tulsi, the association has many well-wishers and that is the one hope that keeps them going. They have had some feelers for an out-of-court settlement but as Sawhney puts it, “It’s not money we are fighting for. I know my daughter will never come back and her laughter will never brighten my day but our fight will, hopefully, ensure a safer life for others.”
That is one lesson that the association members all seem to swear by. To fight for their rights. It matters little, any more that they are up against an influential business house. That’s the thought they have to remind themselves of, every morning and every night, when those shadows begin to lengthen. 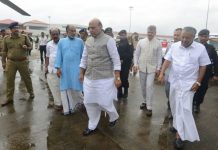