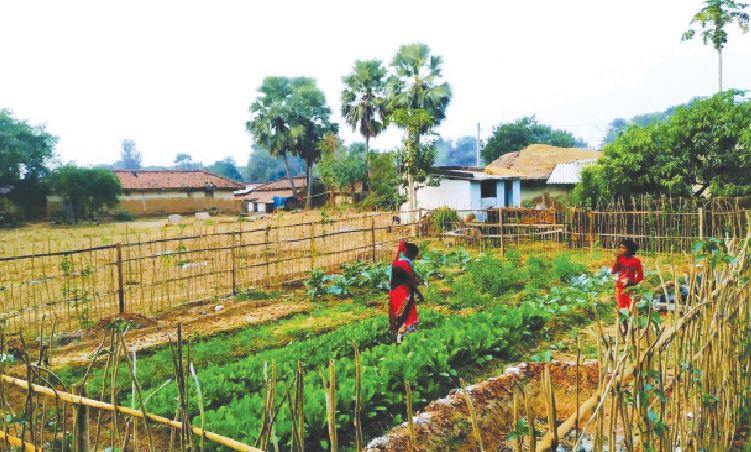 Reena Devi, a resident of Amba village in Boarijor block of Jharkhand’s Godda district, has been mentoring women since 2018 to set up nutrition gardens on plots ranging from 1.5 to 5 decimals of land for growing fruits and vegetables instead of buying from the market. These gardens on small plots of land are either set up in the backyard or in the front space of rural homes and ensure dietary diversity for the entire family.

“I have been mobilising women for the past two years. My job is to bring about a change in their thinking and defeat malnutrition in the district. I offer them tips on the intake of iron tablets, the need to consume nutritious food and take regular measurement of children to check their weight. This has been possible after many women started kitchen gardens and also inspired their neighbours to do the same,” Reena, who is in charge of two panchayats and works with 350 women under her, said.

Reena conceded that earlier, the women had no idea about the concept of nutrition gardens. Most of them belong to poor families. The biggest advantage of growing vegetables and leafy greens in homes is that these can be grown organically, she added. “The women are experimenting with different types of vegetables depending on the season and the availability of seeds. They realised during training how nutrition gardens can transform their lives.”

One such woman is Poonam Devi from the same block. She started a nutrition garden after seeing other women start the same. Now, Poonam grows vegetables throughout the year and her family gets to eat something or the other every day. It is sufficient for meeting her family’s daily needs. She usually grows spinach, radish coriander and cauliflower.

However, Poonam rues that there is not enough produce to sell in the market. “But there has been a sea change in people’s attitude. Even a few years back, women did not bother to attend discussions on malnutrition on the pretext of household chores, but now there is regular attendance,” she added.

As part of the large-scale nutrition project in Godda district, which is part of the Santhal Pargana region of Jharkhand, the idea was to enhance crop as well as dietary diversity. “When we started working, there were critical issues like early marriage of girls mostly at 13-14 years, teenage pregnancy and malnutrition in children. To tackle the situation, the nutrition programme was interlinked with gender intervention measures, alongside large-scale mobilisation to prevent early marriages,” said Ashisa Kumar Rath, team coordinator at PRADAN. The organisation urged women to set up nutrition gardens by arranging for seeds and giving them technical support.

Rath added that side by side there was also a focus on the cultivation of nutritious crops like green gram and pigeon pea aimed at changing the food habit of local residents. Earlier, food habit was mostly restricted to rice and a few veggies. Now, in many parts of the district millets are being cultivated and the area coverage under both millets and pulses has grown considerably, he pointed out.

Most women, who have nutrition gardens, use kitchen wastewater for cultivation. According to Abhishek Kumar of PRADAN, who is the project executive and is based in Godda, a total of 14 different types of vegetables are being promoted under the nutrition garden concept, besides papaya and moringa, as part of the nutrition-sensitive agriculture approach. There are around 15,000 such gardens in the district created from 2018 till 2020 December.

“When we started promoting nutrition-sensitive agriculture in Godda, the focus was specifically on nutrition gardens. We concentrated on the district in a specific manner as maximum number women have small land plots in their backyards. We also tried to promote moringa for better health and nutrition,” Kumar added.

Pinki Devi from Boarijor block said as women have gained considerable awareness on health and nutrition aspects through the concept of nutrition garden, the prevalence of anaemia has reduced to a great extent. Sushila Devi, whose small garden feeds a family of five, said there has been a behavioural change as well. Girls now get married at the age of 18-19 instead of 14-15 as was the custom.

Seeing the success of the nutrition garden initiative, the Jharkhand government launched the Didi Wadi Yojana in 2020 October and linked it to MGNREGA. In Godda, already 5,531 nutrition gardens have been completed under convergence with MGNREGA. Adeline Hansda, district project officer, said as many women benefitted from nutrition gardens, it was implemented under MGNREGA with the cooperation of the Jharkhand State Livelihood Promotion Society (JSLPS) under the rural development department. “We are distributing vegetable seeds to the beneficiaries free of cost as part of the programme. Wages will depend on the decimal size of land plots. For 1.3 decimal plot of land, a beneficiary will get 194 as wage per day for a period of 38 days totalling 7,372.

Rath pointed out that under MGNREGA, the state government is paying the women for setting up nutrition gardens and this will act as an encouragement. In this way, a greater number of beneficiaries can be reached. “Back in 2018 when we started, communities were mobilised to take up this programme. The problem is that sometimes women keep seeds in homes and do not bother to sow them. Still, we encouraged families to buy seeds on their own and arranged for the seeds from our nurseries. We encouraged them to start the process anyhow. On our own, we can only reach a few families but the government scheme will be far reaching,” he said.

Reena explained that the Didi Wadi Yojana focuses a lot on the exact measurement of plots for setting up nutrition gardens. Previously, many women used to set up the gardens in a haphazard manner. The nutrition garden concept has come in as a blessing for the rural poor during the COVID-19 pandemic when many families cannot afford to buy food from the market.

Hansda added that under the scheme, which will continue for three years, women will continue to get seed kits by the JSLPS procured from the National Seeds Corporation Limited. 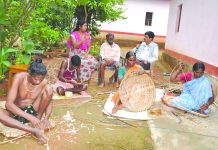