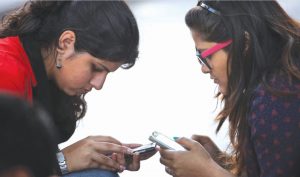 The adage “Excess of Anything is Bad” couldn’t have been more relevant than it is now, especially, in the context of the generation Z which is hooked to screens. Be it the mobile phones, i-pad devices or even the age-old television sets, from toddlers to teenagers, all are addicted to or at least glued to the screens most of the time.

While the ill effects of excessive screen time are fairly known for some time now, various studies published in the recent times have set the alarm bells ringing.

If that was not enough for parents across the globe to sit and take note of, admissions by tech giants themselves of the likes of Bill Gates, Founder, Microsoft, Facebook Co-Founder Mark Zuckerberg and now late Apple Co-Founder Steve Jobs, on how they limit the usage of the mobile phone devices and technology at homes, should definitely be taken seriously. After all, who knows the cons of the technology and the devices than the creators themselves?

Microsoft founder-turned-philanthropist Bill Gates, in an interview to a leading international daily, last year, said that he has set strict rules for how his three kids grew up “in a home that forbade mobile phones up until age 14, banned mobile phone use at the dinner table, and set limits on how close to bedtime kids could use their phones”.

According to reports, Bill Gates in 2007 apparently implemented a cap on screen time when his daughter started showing signs of video gaming addiction.

Late Apple co-founder Steve Jobs never let his kids use iPads at home. “We limit how much technology our kids use at home,” Jobs had told a leading international daily.

Mark Zuckerberg, the co-founder of Facebook once said that the solution to the broken school system is introducing more technology. But when it comes to his own home, technology comes a distant second to books for his daughters.  Before they get hooked to a device with a screen, Zuckerberg wants his daughters Maxima and August to “read Dr Seuss and play outside” rather than use Facebook.

According to Sean Parker, one of the Facebook founders, the digital world’s addictive qualities “exploit vulnerability in human psychology. God only knows what it’s doing to our children’s brains”, he once said.

A recent study conducted by the San Diego State University and published in the Journal Preventive Medicine Reports, highly, recommends reduced screen time for the wellbeing of children. According to the findings of the University, too much time spent on gaming, smartphones and watching television is associated with heightened levels and diagnoses of anxiety or depression in children as young as age two.

As per the study, even after only one hour of screen time daily, children and teenagers may begin to have less curiosity, lower self-control, less emotional stability and a greater inability to finish tasks.

Among pre-schoolers, high users of screens were twice as likely to often lose their temper and 46% more likely to not be able to calm down when excited, the study states.

In the Indian context, the study states that an average person checks their phones every 6.30 min in a 16- hour waking cycle. A recent Indian survey revealed that 95 per cent of kids live in homes with a mobile phone while 73 per cent of Indian kids are mobile phone users. Of these, 70 per cent fall under the age group of 7-10 years while 76 per cent are in the age group of 11-14 years.

That’s not all. A study conducted last December study by the University of Michigan, USA,  suggests that how children use the devices is the strongest predictor of emotional or social problems connected with screen addiction.

The study demonstrated that there is more to the problem than just the number of screen hours. What matters most is whether screen use causes problems in other areas of life or has become an all-consuming activity, stated one of the researchers of the study.

Some of the warning signs include if screen time interferes with daily activities, causes conflict for the child or in the family, or is the only activity that brings the child joy.

Take the 2014 study from the University of California Los Angeles that found that kids who went five days without exposure to technology were much better at reading human emotions than kids who had access to televisions, computers and phones. Too much screen time can permanently dull kids’ abilities to read nonverbal cues, accept delayed gratification, and actively engage with the world around them.

Apart from how prolong use of screens adversely affect the functioning of the brain, a rather known ill effect of the screen, is how it affects the vision of the children.  A study conducted by the department of Paediatrics, Post Graduate Institute of Medical Education and Research (PGIMER), Chandigarh, revealed that excessive use of mobile phone screen can lead to double vision and squinted eyes.

The study was done by the paediatric ophthalmology team at Advanced Eye Centre (Dr. Savleen, Dr Manpreet, Dr. Jaspreet Sukhija) which has brought forward an unknown side effect of excessive usage of mobile phones.

The study which was published in the Neuro Ophthalmology Journal recently shows that children aged between 8-12 years developed squint and double vision after using mobile phones for more than four hours in a day. On stopping the use of mobile phones, these children recovered completely.

Dr Adarsh Kohli, professor of Clinical Psychology, at the Post Graduate Institute of Medical Education and Research (PGIMER), said, “Right from one year onwards, children are hooked to the screen. They eat while watching the shows or videos and are engrossed in their own world. Parents do not find a better way to distract them other than the screen. As one grows older, these children find other activities to do with the devices such as playing games on screens and thus get addicted to its use. Its addiction is common to children and adolescents alike. It keeps them away from social interactions and challenges of life. Unlimited hours on the screen makes them lethargic and less active. They eat junk food and sleep less. This all makes them moody and restless. They cannot hold a conversation for long and find it hard to focus on other areas”.

She suggests, “It is very pertinent for the parents to exert optimum control and should set timings for all recreational activities especially those on devices to minimise screen timings.They should encourage outdoor activities and encourage more human interactions for the well being of the children”.

The parents working and living in the Silicon Valley, California, which houses some of the biggest names in the tech world with a sizeable Indian workforce, are already showing concerns about usage of devices and technology. Having seen first-hand the potentially harmful impact of technology on the children either through living or working in the Bay Area, the parents are following in the footsteps of tech giants who have set limits for their own children for years.

In fact, a 2017 survey conducted by the Silicon Valley Community Foundation in California, found among 907 Silicon Valley parents that despite high confidence in technology’s benefits, many parents now have serious concerns about tech’s impact on kids’ psychological and social development.

Closer home, in Bengaluru which is also known as India’s Silicon Valley and Gurgaon, techies are also becoming more wary and are thus limiting or even prohibiting the use of screens at all for their children.

Instead most of these parents are now enrolling their children in schools which have very limited use of technological devices and instead focus on traditional methods of imparting education such as using chalk and board instead of e-boards, Google Chromebook etc for school work.

Saubhagya, a techie working in Bengaluru and her husband Sathish- both top executives in leading software firms use both mobile phones and computers while at work. But when it comes to their three year old daughter Wanika, screen time is strictly limited.

“Call it an occupational hazard, but working in and around technology the whole day and sometimes at odd hours, made us cautious for our daughter. We are well aware of the potential harmful effects that technology can have on our child and therefore we want to avoid it for as long as we can”, echoed the couple.

Similar is the story of another tech couple from the city, Rohini and Shamik, both working as senior executives in a US based firm and even frequent the country often for work. “Initially, we enrolled our four year old daughter to a fancy private school in Bengaluru, hoping to get her the best education amidst a great environment. However, we had to take her out of the school within a month after we realised that the school relies too much on technology-they had projectors in classrooms instead of regular white/black boards; for recreations, the children were sent to the mini theatre within the school for watching rhymes, cartoons etc. Even the homework was to be done on I pads. Since we have prohibited her from using any device at home, we did not want her to get access to screens at the school. The idea is to keep her away for as long as we can”, averred the couple.

There is a complex relation between screen time, psychological and social health, physical activity, and cognition. If all this gets you thinking, then you might want to revisit your own household’s rules vis-à-vis letting your children watch mobile screens or even computers for long hours. At the same time, you would not want your child to feel left out among his peers. So a fine balance is what needs to be achieved here. Some handy tips straight up from the tech giants can be followed too such as no mobile phones until kids turn 14, banning devices at meal times, setting strict limits on screen time during weekdays. Last but not the least, limiting your own screen time in the presence of children for they imitate us afterall!