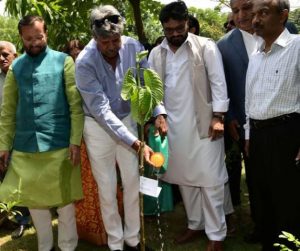 Union Minister for Information & Broadcasting and Environment, Forest and Climate Change Prakash Javadekar on Wednesday said that his ministry will soon launch an initiative called School Nursery across the country in which school kids will plant a seed, nurture the sapling and on his/her annual result would take the plant to be a trophy.

“In this initiative, the local forest department will provide the necessary support, and through this initiative, we want to nurture a perpetual bond between school kids and plants.”, Javadekar said.

As a part of the campaign #SelfieWithSapling launched today Javadekar planted saplings in the premises of Environment Ministry in New Delhi along with the Minister of State in the Environment Ministry Babul Supriyo, renowned cricketer Kapil Dev, Bollywood actors Jackie Shroff and Randeep Hooda and noted singer Malini Awasthi.

They all gave out the message of environment protection and importance of planting a sapling. Javadekar urged all to join and plant a sapling and post the selfie with the sapling on social media.

Later interacting with the media, the Union Minister stressed that ‘Jan Bhagidari’ is integral towards tackling the environmental issues and the environment protection has to be a people’s movement.

“For the amount of oxygen an individual requires, he should plant at least 8-10 saplings in his lifespan”, stressed the Union Minister.

The Union Minister also praised the commitment of Union Transport Minister Nitin Gakari for pledging to plant 125 crore trees on both sides of National Highways, which runs through thousands of kilometers across the country.

The World Environment Day (WED) urges governments, industries, communities and individuals to come together to explore renewable energy, green technologies and improve air quality in cities and regions across the world.

The celebration of this day provides us with an opportunity to broaden the basis for an enlightened opinion in preserving and enhancing the environment. World Environment Day is the biggest annual event for positive environmental action and takes place every year on 5th June.