The Supreme Court on September 20 ruled that Dilbagh Singh will continue as the acting chief of the Jammu and Kashmir police until the Union Public Service Commission (UPSC) takes a decision on the matter.

The SC bench led by Chief Justice of India Dipak Misra asked the UPSC to take a decision on the “suitability” of senior police officers who can be appointed as the state’s Director General of Police (DGP) within four weeks time frame.

The court was hearing the petition filed by Prakash Singh, he asserted that although the senior-most officer should have been appointed after SP Vaid’s exit, a junior officer was instead given charge.

Senior apex court lawyer Prashant Bhushan appearing for the petitioner apprised the three-judge SC bench that it is gross contempt of court as the procedure laid down for the change of DGP in the state has been allegedly deliberately violated by the state administration.

However, the state government cited “complex security concerns” and other reasons, including the upcoming civic body polls, insurgency and terror-related activities, as the reasons for Singh’s unconventional appointment, and asked the SC to modify an earlier order making it mandatory for all states to send a list of three senior-most IPS officers to the UPSC for clearance before appointing the DGP. 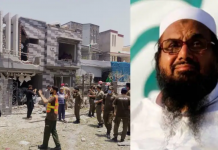