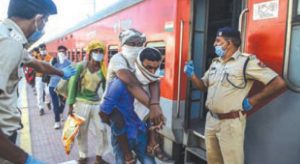 With the Supreme Court passing a detailed interim order on May 28 about the transportation of migrant workers, a ray of hope has dawned for the safe arrival of these migrants to their respective destinations. However, much also depends on as to what extent the guidelines issues by the Apex Court are abided by the Centre and state governments.

On June 5 again, the Supreme Court said that 15 days should be enough time for states to send migrant workers – stranded in cities across the country since the imposition of nationwide lockdown — home. The top court also asked all states to create employment opportunities for migrants returning home.

Since the promulgation of the lockdown on March 25, the nation has been witnessing heart-rendering visuals of weary migrants agonizingly trudging along roads — having been compelled to set out on grueling journeys to reach their native places. The periodic extensions of the lockdown period without addressing their plight left no options for these migrants but to set out for their native places. Acknowledged as the ‘backbone’ of the Indian economy, these migrant workers are not accorded appropriate status corresponding to their contribution. And in a time of man-made adversity as a result of wrong policies of unplanned implementation of the lockdown, when these workers sought a little assistance from the country in their quest to reach their destinations, the entire nation failed to provide them food, shelter and conveyance.

Imposition of lockdown with four hours’ notice on March 25 in the wake of coronavirus pandemic caught millions of interstate migrant laborers in India unprepared. In the wake of extension of the lockdown in mid-April, many of these workers decided that with no jobs and wages, and public transport shut, they would rather walk hundreds of miles to home in groups, and reach their home villages than in die of hunger or pandemic in other states. Despite some arrangements of transport by rail or road having been put in place since early May to carry these workers to their respective destinations, large hordes still continued to march on foot until the Supreme Court in a SuoMotto interim order on May 28 to issues instructions to make transport arrangements for these migrants.

According to broad estimates, there are four crore migrant workers in India. Viewed in a broad perspective, there are some 53.8 crore ‘unorganized’ workers in India, out of the current population of 138 crore, and this number encompasses those in agriculture, mining and service sectors as well. The Tughlaq-style mess in which migrant workers have been placed for no fault of theirs as a result of lack of constructive planning, has also witnessed shifting of blame-game between the Centre and the states and the Centre has passed on the buck to the states.

Amidst this Centre-State tussle over interstate migrant workers, some experts have drawn attention to the constitutional provisions in this regard. According to experts, Article 217 read together with ‘list 1’ under the seventh schedule of the Constitution clearly mentions ‘item 81’, namely “inter-state migration and inter-state quarantine” to be a power of the Centre. Experts further point out that accordingly, the central government alone is empowered to deal with this in general, and interstate migrant workers are ‘surely’ a part of the ‘power’ and the responsibility.

Undoubtedly, the list of states’ powers and responsibilities don’t mention ‘interstate migrants’; nonetheless, that does not absolve them totally, because both the Centre and the states are recipients of such labor and exporters as well.

While drawing attention to the Concurrent List of powers on which both the Centre and states can legislate and administer, some experts have opined that this List contains quite a few relevant entries, such as Item 22 that mentions “trade unions, industrial and labour disputes” while item 24 cites “welfare of labour” and allied issues. Many experts are of the view that these provisions have largely benefitted organized labourwhereas unorganized labour has remained ‘a pitch-black area under the lamp.’ Lamentably, even orders issued by the Home Ministry under section 6(2)(i) of the Disaster Management Act of 2005, to deal with COVID-19 situation in the country, major problems concerning the most distressed section and of hungry unemployed workers remained ignored. Even the so-called the clanging of pots and the lightning of lamps as expression of gratitude towards Corona Warriors, the migrant laborers — the real warriors — were forgotten.

Much-hyped economic package 20-lakh crore, comprising 10 per cent of India’s GDP, promises relief and rehabilitation, mainly to assist corporates, MSMEs, banks, financial institutionsetc., and contains a slice of it — a thin one, for the hardest-hit stranded unorganized migrant workers. It was just 0.175% of the much-touted 20 lakh crore economic package, which has recently been lowered to 0.155%.

In the wake of economic package for migrant workers and small farmers heavily favoring longer-term credit-focused proposals over a more direct approach like cash transfers, observers have called it a ‘loan-mela’ that offers no immediate relief to sections of populations most affected by the lockdown.

The announcements made in the second tranche amounting to 3.16 lakh crore of the economic package is a hodgepodge of nine different steps.

Three for migrant workers and the urban poor, two for small traders and vendors, two for farmers, one for India’s middle-class and one employment programme that involves tapping into a Supreme Court-mandated fund for afforestation that has thousands of crores piled up over a lack of use.

However, economists and market analysts opine that actual cash outlay by the Centre for this financial year will be far lower and could range from anywhere between 5,000 crore and 14,750 crore.

Financial experts are skeptical about impacts or consequences of these smaller scalpel-like moves in a scenario that calls for the target groups of this package to be able to quickly and easily access the benefits on offer.

On May 29, the BJP celebrated six years of the Modi government, by releasing an audiovisual clip on its “unprecedented” achievements just hours after a road accident killed 24 migrant workers in the latest reminder of the stranded laborer’s sufferings.

The celebratory video released from BJP’s official Twitter handle under the title “Modi sarkar ke 6 saal… bemisaal (Six years of the Modi government… without parallel)” makes no reference to the government’s dealing with COVID-19 crisis or to the migrant crisis, and only harps on Modi government’s old schemes.

The posting of the celebratory video by the BJP at such a critical juncture when the country striving hard to deal with the pandemic and the resultant humanitarian crisis the like of which the country has not witnessed since Partition, has attracted sharp criticism on social media.

The humanitarian crisis of migrant workers has reiterated the need for working out long-term policy measures through adequate legislation, financial resources and non-partisan approach so that such recurrence of tragedy does not take place.

These workers ought to be hailed as Economic Warriors. Some experts have suggested that the Central government should come out with a legislation thereafter ensuring its implementation in letter and spirit by identifying each migrant worker by name, even including those who are seasonal or pat-time workers.

For the time-being immediate cash relief needs to be provided to these workers to enable them to live with dignity and this is not impossible in a digital age provided the government shows political will to do so, to avert recurrence of present fiasco.