The Supreme Court on Monday pulled up the Bihar Police for its failure to arrest the former minister Manju Verma linked to the Muzaffarpur Shelter Home case.

The top court summoned the Director General of Bihar Police to appear before it on November 27 if the police failed to arrest Manju Verma by then.

On November 1, a non-bailable warrant was issued against Manju Verma after Supreme Court rapped the Bihar government for not arresting Verma.

An FIR was registered against Manju Verma and her husband Chandrasekhar Verma in August after the CBI recovered arms and ammunition from her residence during raids in connection with the shelter home rape case.

Manju Verma had in August resigned as Social Welfare Minister of Bihar following the revelations that her husband Chandrakant Verma had alleged links with key accused Brajesh Thakur in the Muzaffarpur shelter home sex scandal case.

Over 40 girls were sexually assaulted at a shelter home, which was run by Brajesh Thakur’s NGO at Bihar’s Muzaffarpur. 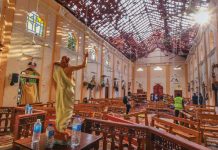