Initially, the court had made her release subject to BJP leader tendering an apology, however later it called back senior advocate NK Kaul, representing Priyanka Sharma, and clarified that she has to be released immediately.

On Monday, Sharma had moved the top Court against her arrest last week for sharing the meme of Banerjee.

The Court had agreed to hear the matter today.

A bench, comprising justices Indira Banerjee and Sanjiv Khanna observed that since Priyanka Sharma is a member of a political party, the insinuation of posting such a picture will be different from those shared by common people.

A BJP Yuva Morcha leader allegedly shared on social media a photo in which TMC chief Mamata Banerjee’s face has been photoshopped on to actor Priyanka Chopra’s picture from the MET Gala event in New York.

Her arrest had sparked outrage on social media. 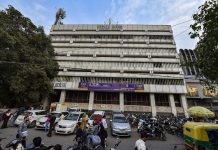