The Supreme Court on Wednesday dismissed the government’s preliminary objections against using privileged documents for considering the review petitions in the Rafale case.

The top Court said that the review petitions will be heard on merits and a date will be fixed for that.

A bench of Chief Justice of India Ranjan Gogoi and Justice S K Kaul and Justice K M Joseph in a unanimous decision has held that it would consider the papers while examining the review petition.

CJI Gogoi said the review petition would be considered on the basis of the three documents whose admissibility was questioned.

The petitioners have sought for review of the December 14 judgment dismissing the plea for probe into the corruption allegations in the Rafale deal by relying on reports published by ‘The Hindu’,

Justice KM Joseph also concurred with the conclusion but wrote a separate judgment.

On March 14 the court had reserved its decision after hearing the Centre and the petitioners.

The Court was hearing the review petitions filed by Prashant Bhushan, Yashwant Sinha and Arun Shourie against the December 14 judgment when the top court had dismissed the petitions and said that there was no reason to ‘doubt the decision-making process’. 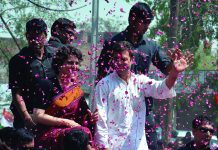