The Supreme Court on Friday directed the Central government and 11 states to prevent incidents of threat, assault, social boycott and harassment of Kashmiris in the aftermath of the Pulwama terror attack.

Supreme Court advocate Tariq Adeeb filed a petition on Thursday requesting the apex court for an urgent hearing of the plea. He also mentioned the tweet of Meghalaya Governor Tathagata Roy who called for a boycott of “everything Kashmiri”.

“An appeal from a retired colonel of the Indian Army: Don’t visit Kashmir, don’t go to Amarnath for the next 2 years. Don’t buy articles from Kashmir emporia or Kashmiri tradesman who come every winter. Boycott everything Kashmiri. I am inclined to agree,” Roy tweeted on February 19.

A Bench headed by Chief Justice Ranjan Gogoi also directed that police officers, who were earlier appointed as nodal officers to deal with incidents of mob lynching, would be now responsible to deal with cases of alleged assault on Kashmiris.

A bench headed by Chief Justice of India Ranjan Gogoi said the police officers who were appointed as nodal officers to deal with incidents of mob lynching would now be responsible to deal with cases of alleged assault on Kashmiris.

The court told the Union Ministry of Home Affairs to give wide publicity of the nodal officers’ so that those who need help can approach them easily.

Justice Sanjiv Khanna said, “the chief secretaries, the DGPs and the Delhi Police Commissioner are directed to take prompt and necessary action to prevent incidents of assault, threat, social boycott against Kashmiris and other minorities.”

“Grateful to the Hon Supreme Court of India for doing what our elected leadership in Delhi should have been doing. The union HRD minister was busy living in denial & a Governor was busy issuing threats. Thank goodness the Hon SC stepped in,” Omar tweeted. 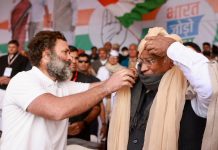