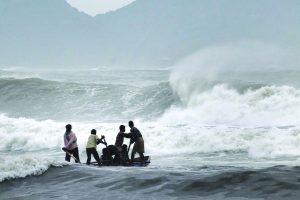 Nearly 100 Indian fishermen went missing after a powerful storm struck the country’s southern coast with Poonthura, a fishing village in the state of Kerala reporting a loss of 57 men at sea way back in December 2017.

During 2018-19, 37 fishermen from West Bengal lost their lives while fishing in the Bay with Sundarbans Delta region registering maximum number of deaths of fishermen according to data from Kakdwip Fishermen’s Association, one of the largest fishermen unions in West Bengal.

Such unfortunate incidents bring back the terrifying memories of the tsunami in 2004 that devastated coasts along the Indian Ocean. Whether it points to the failure of the meteorological department in informing very late about the severity of the cyclones or ill preparedness on the part of the state governments, the end result is that people have to suffer. You may blame climate change or overexploitation of marine resources as those responsible for such like incidents, the fact remains that no tangible solution has been found so far as rising sea temperatures, the severity of storms has increased over the past decade.

The secretary of the fishermen’s association at Kakdwip, Nikon Maity, has reportedly pointed out that severity of cyclones has increased now. Scientists too say that due to global warming, the ocean property is changing. The sub-surface water temperature is more than the surface water, leading to more conservation of energy and the ability of the sea to form severe cyclones.

According to Union Minister for Earth Sciences, Science & Technology and Health & Family Welfare, Dr. Harsh Vardhan “The satellite based communication is the only suitable solution for the dissemination of such emergency information and affordable satellite based communication system should be made part of the dissemination chain to deal with cyclones, high waves and tsunamis”. While PFZ Advisories provide information on the probable locations on fish aggregation in the seas, OSF provide the accurate state of the ocean.

The Minister pointed out that “Ocean State Forecasts include the forecasts on winds, waves, ocean currents, water temperature, etc. at every six hours on daily basis for next five days helping fishermen in maximizing their earnings, ensuring safety and in planning of fishing activities”.

Though the advisories and forecasts are disseminated through multiple communication modes, none of them could provide such information, including the disaster warnings when the fishermen move away from the coast beyond 10-12 km (typical ranges of mobile phones and VHF). That remained as a major limitation in disseminating the information to fishermen who go in the sea beyond 50 nautical miles; sometimes up to 300 nautical miles and beyond to conduct multiday fishing.

This lacuna was severely felt during the Ockhi cyclone in 2017, when fishermen went out, for deep-sea fishing before the onset of the cyclone and could not be informed about the developing cyclone. This communication gap resulted in loss of life, serious injuries to those rescued and severe damages to fishing boats and fishing gear.

GAGAN foot-print covers the entire Indian Ocean round the clock. To receive the messages transmitted through the GAGAN satellites, INCOIS together with AAI developed a low-cost GAGAN system-enabled GEMINI (GAGAN Enabled Mariner’s Instrument for Navigation and Information) device and electronically designed and manufactured by a private industry Acord, Bangalore under Make in India Program.

The GEMINI device receives and transfers the data received from GAGAN satellite to a mobile through Bluetooth communication. A mobile application developed by INCOIS decodes and displays the information in nine regional languages.

Technology is not only reaching fishermen during distress, it is also now reaching farmers. Considering the urgent need of sharing the agro-meteorological knowledge among researchers, policy makers, industry and farmers to learn from each other, identify the technologies/practices and develop a roadmap for risk management, the Association of Agro Meteorologists (AAM) organized a 3-day International Symposium on “Advances in Agro Meteorology for Managing Climatic Risks of Farmers” (INAGMET-2019) at Jawaharlal Nehru University, New Delhi during the year 2019.