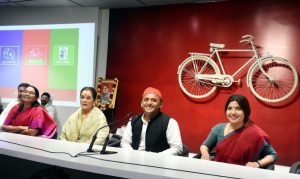 Poonam Sinha, wife of actor-turned-politician Shatrughan Sinha, on Thursday, filed her nomination for the Lok Sabha Elections from Lucknow.

Poonam is pitted against BJP’s Union Home Minister Rajnath Singh in the constituency. Her candidature was announced by SP president Akhilesh Yadav on April 17.

Poonam had joined the SP in the presence of party leader Dimple Yadav in Lucknow on Tuesday, the day when the sitting MP, Rajnath Singh filed his nomination papers.

SP, BSP, and RLD are contesting Lok Sabha polls in alliance in Uttar Pradesh in which the SP will contest on 37 seats while BSP on 38 and RLD on three.

Polling for the second phase of Lok Sabha elections is underway across the Country.