The Uttar Pradesh poll verdict painting the country’s biggest state in saffron hue along with Uttarkhand and installation of BJP governments in Manipur and Goa is akin to John Milton’s ‘Paradise Regained’ after his epic poem ‘Paradise Lost’. The BJP and its leadership (read Modi and Amit Shah), fully deserve their moment of glory in the sun. However, Prime Minister Narendra Modi, looking beyond the 2019 elections, has pitched for building a “new India” by 2022. He tweeted, “India is emerging, which is being powered by the strength & skills of 125 crore Indians. This India stands for development.” In a statement on his website Narendramodi.in he said, “India is transforming, powered by the strength of each and every citizen of India. An India that is driven by innovation, hard work and creativity; an India characterised by peace, unity and brotherhood; and an India free from corruption, terrorism, black money and dirt.” The BJP chief Amit Shah said people had expressed faith in Modi’s leadership. “The win in the state Assembly elections is bigger than our victory in 2014 Lok Sabha poll. We will get a bigger mandate in 2019,” he said. Even in this hour of victory when others were busy celebrating, Modi and Amit Shah were looking forward to Gujarat and Himachal Pradesh, their next targets, which go to the polls later this year.

From a party visible only in select urban pockets, the BJP has come a long way to have strong presence in 14 states decimating the grand old party — Congress and major regional outfits like the Samajwadi Party and the Bahujan Samaj Party. The BJP’s rise has been as swift as the fall of Congress. In fact, after setbacks in Delhi and Bihar, the BJP leadership had resorted to strong measures to divert attention and build Modi brand. Seldom before an Army action against terrorists (surgical strikes) had been used to boost a political party’s chances in an election. The Modi government demonetised 86 per cent of the country’s currency suddenly creating a storm but the party was able to swing it in its favour. The successive municipal and panchayat elections created a favourable environment for the BJP.

Except perhaps Punjab, the BJP strategy and Modi-Shah magic has worked well. After Assam, the BJP entry into the North-East stands consolidated with Manipur. The party has captured Uttarakhand and managed a government in Goa. The BJP will be more confident of having its way in Parliament as it will raise its strength in the Rajya Sabha in next round of polls as well as the upcoming Presidential election. The only solace for Rahul Gandhi has been Congress party’s landslide win from Punjab. 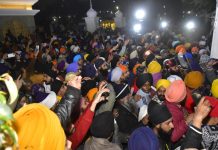