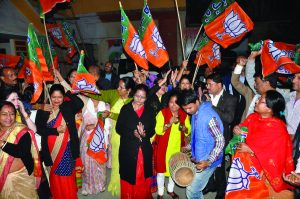 For many, the ruling Bharatiya Janata Party (BJP) is losing the poll-battles as more and more important States have gone under the control of Congress. Soon after the outcome of recently concluded Assembly polls in central provinces surfaced the political observes started making comments that the saffron party has started losing the game on the eve of general elections scheduled for early next year.

However, the nationalist party recorded an impressive victory in Assam Panchayat elections overcoming almost an uproarious situation because of Centre’s initiative to grant citizenship to the religious minorities from three neighbouring countries including Bangladesh. As many as 70 State bodies were constantly raising voices against the Citizenship Amendment Bill 2016 in Assam and they even urged the electorate to defeat the BJP in the rural polls.

But the electorate perhaps did not consider the appeal as worthy and hence put the saffron party at the top of their preferred list of local representatives. The party, which came to power in Dispur with their prime allies namely Asom Gana Parishad (AGP) and Bodoland People’s Front (BPF) in the State Legislative Assembly polls 2016, maintained its winning spree.

According to the State election authority, the BJP gained over 40 % seats in the three-tier Panchayatiraj system at the village, intermediate and district levels, which was followed by the Congress, All India United Democratic Front (AIUDF), AGP that fought Panchayat polls alone and other political parties.

Elections were held in 26 districts of Assam, where 78,571 candidates were in the fray for altogether 26,808 seats under 21,990 Panchayat wards. Inspiring over 80 was recorded the polling percentage in the two-phase polls on 5 and 9 December 2018. Counting of ballots took place on 12 December with strict security arrangements and under the CCTV surveillance.

Business-typhoon Badruddin Azmal led AIUDF emerged as a loser in the rural polls, as the party could not retain its vote share among the Bengali-Muslim families living in Assam. The AGP also lost its support bases among the mainstream Assamese Hindus as the regional party tries to nurture Muslim vote banks in Brahmaputra valley. However, the Congress recorded a good show in the polls as it succeeded attracting the Muslim voters than AIUDF and AGP. The century old party under the leadership of Rahul Gandhi had proved that its influence over the State electorate was growing even after the last Assembly poll-debacle.

The ruling party achieved significant supports from voters in Kamrup (Metro), Kamrup, Majuli, Lakhimpur, Biswanath, Dibrugarh, Tinsukia, Charaideo, Dhemaji, Sonitpur, Sivasagar, Golaghat, Nalbari and Cachar districts. The Congress did good in Jorhat, Morigaon, Barpeta, Karimganj, Dhubri, Hojai, Bongaigaon districts. Prime Minister Narendra Modi was quick to thank the electorate of Assam for their support to his party in rural polls. In a twit, Modi also added, “Over the last few years, the BJP and the NDA family have become the preferred choice of the northeast. We consider it our privilege that we have the honour of fulfilling the aspirations of the northeast and taking the region to new heights of progress.”

Even though Assam enacted the Panchayat Act in 1948 and later adopted Assam Panchayat Act 1994 after few amendments, the Panchayat elections in the State were irregular and in most of the time the ruling party ignores its responsibility to hold rural poll-exercises on time.

The BJP-led government in Dispur was also reluctant for the Panchayat  polls putting the reason that its 50,000 employees were engaged in the updation process of National Register of Citizens following the directive of Supreme Court of India. But Gauhati High Court directed the authority for Panchayat polls and subsequently the exercise passed on successfully.

Assam Chief Minister Sarbananda Sonowal and his cabinet minister Himanta Biswa Sarma made the Panchayat poll-campaigning more expensive as they used helicopters for attending the public meetings. In their poll-speeches Sonowal emerged critical to the Congress, where Sarma went on censuring all opposition political parties including their ally AGP too.