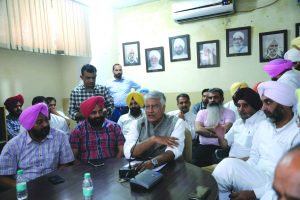 The Shiromani Akali Dal has reacted strongly against what it described as “outrageous, hateful and sacrilegious remarks of Sunil Jakhar in which the Congress leader had talked about “the divisive legacy of Guru Nanak Dev ji between Hindus and Muslims leading to the India-Pakistan partition in 1947.”

The SAD asked Jakhar to apologise to the entire humanity and especially to the devout Nanak Nam Leva Sangat all over the world for giving an unforgivable communal twist to the life and the sacred message of the great Guru.”

It may be recalled that Jakhar had said in Sultanpur Lodhi on Friday that the foundation stone of partition between India and Pakistan had been laid when the Hindu and the Muslim followers of Guru Nanak Dev ji divided his “Chaadar” ( sheet) to be cremated separately as per the rites of each religion when Guru Sahib left for his heavenly abode.”

In a strongly worded statement here, two senior Akali leaders, Bawlinder Singh Bhunder and Mahesh Singh Grewal today described Jakhar’s remarks as “full of communal venom and utterly unacceptable” and said that it was unbelievable that the Congress party which, along with Muslim League, was the prime villain in the partition between India and Pakistan, should now blame the tragedy on the events in the life of the great Guru Nanak patshah and his followers. Left to its own designs, the Congress could have caused even a second partition of the country when it massacred thousands of innocent followers of Guru Nanak Sahib in 1984.”

The SAD also asked Captain Amarinder Singh to clarify if he and his party shared Jakhar’s views in this regard. “Jakhar and the Congress party’s remarks are born of an utter disrespect for the Guru’s cosmopolitan philosophy which brought the Hindus and the Muslims together. The act of dividing the Chaadar was also symbolic of the shared love and respect in which both communities held Guru Nanak Dev ji. Their mutual decision to share the chaadar (sheet) had in fact united the two communities who decided with mutual and friendly consent to pay their respective reverence to the great Guru by sharing his legacy symbolised by the Chaadar. The act showed that the Hindus and the Muslims who were otherwise at loggerheads with each other were united by the great Guru and the decision of both to peacefully consign a part of the chaadar as per the traditions of their respective religions is the unique, unprecedented and historic act of communal harmmony in which two mutually hostile communities displayed their love and reverence for the same prophet whom both followed and claimed as their own.”

Bhunder and Grewal said that Jakhar seems to forget even recent history because while the Hindus and Muslims wanted partition of the country in 1947, it was left to the Sikhs to oppose it and to advocate the cause of unity and of a united India. Who can forget how the SAD leader Master Tara Singh ji representing the Sikhs had opposed the partition all along. While the SAD stood for a united India, the country was partitioned because both the Congress and the Muslim league chose to ignore the message fo the Great Guru Nanak Dev ji and agreed on a communal partition of the country of the great Guru who gave voice to his anguish and protest even against God over the tyranny and persecution of the people of India at the hands of the invaders? “(Khurasaan khasmaan keeya, Hinduustan draaya)

The Akali leaders asked Jakhar not to forget that even today, both India and Pakistan have been brought on the same platform by the legacy and the followers of the Great Guru through the proposed corridor to link Dera Baba Nanak with the sacred Gurdwara Sahib at Kartarpur Sahib. “India and Pakistan have been speaking the language of hate and enmity recently. It is only only befitting that the governments of the two countries have decided to transcend this hatred and join hands on the 550th Parkash Utsav of Guru Nanak Dev ji on the issue of the corridor to link the historic shrines linked with the life of Guru Sahib. How strange that people like Jakhar are too full of communal hatred and bitterness even today to see and understand the significance of this simple development.”

The Akali leaders said that Jakhar represents the mindset of hate as was evident by the remarks of his father on the massacre of thousands of innocent followers of Guru Nanak by Congress goons in 1984. He must apologise for his sacriligious remarks,” said the two leaders.