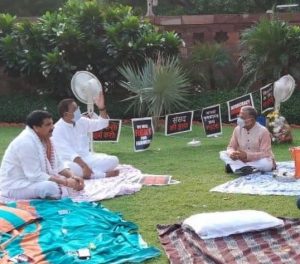 Rajya Sabha Deputy Chairman Harivansh Narayan Singh on Tuesday met the suspended MPs, protesting on the lawns of Parliament and served them tea.

Eight opposition members were suspended from the Rajya Sabha on Monday over the ruckus and chaos in the house during the discussion on farm bills. In order to protest the decision of their suspension and their demand to revoke the farm bills, these eight MPs spent the whole night near the iconic Mahatma Gandhi statue inside the Parliament premises.

Prime Minister Narendra Modi took to microblogging site and lauded Harivansh Singh’s gesture and said, “To personally serve tea to those who attacked and insulted him a few days ago as well as those sitting on Dharna shows that Shri Harivansh Ji has been blessed with a humble mind and a big heart. It shows his greatness. I join the people of India in congratulating Harivansh Ji.”

Meanwhile, Harivansh Singh will observe a daylong fast against the “unruly behaviour” with him in the House by Opposition MPs.