Four men allegedly robbed a jewellery showroom of valuables worth lakhs of rupees at gunpoint in east Delhi’s Pandav Nagar on Thursday afternoon.

According to the Deputy Commissioner of Police (east), the shop owner and his wife were held hostage at gunpoint by three armed robbers.

The accused fled with Rs 2 lakh cash and jewellery worth several lakhs of rupees, police said.

CCTV cameras installed inside and outside the showroom were noticed by the robbers, they damaged the cameras and took the Digital Video Recorder along with jewellery worth lakhs of rupees, the officer said.

According to the sources, four accused came in a car. The robbers parked the car in front of the showroom and one among them stood outside the showroom keeping an eye on the activities, while the other three men, each armed with a pistol barged into the showroom.

They allegedly held the shop owner and his wife at gunpoint, threatened to shoot them if they shouted.

The robbers looted diamonds, silver and gold jewellery that were on display and carried it in a bag. While fleeing from the jewellery shop, they again threatened to shoot the couple if they shouted in defense, a police officer said.

Police along with a crime and forensics team rushed to the spot after they were informed about the incident and collected fingerprint and other evidence as well, the officer added.

A case was registered by police and the matter is being investigated. 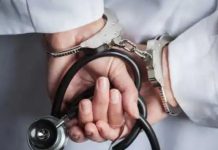 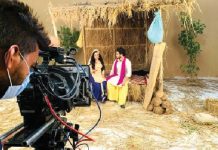