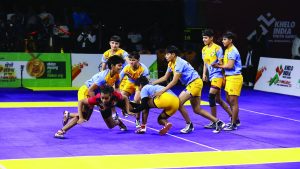 Roadmap for developing the sports in the country is guided by twin objectives of National Sports Policy 2001 viz., broad-basing of sports and promotion of excellence in sports. Every time India does well at a multi-sport event, there is a chorus that we have arrived on the world stage. However, there is a strong need to concentrate on creating new infrastructure facilities and providing adequate foreign exposure to our front-line sportspersons.

The Minister of State for Youth Affairs and Sports, Kiren Rijiju in a written reply in the Lok Sabha informed on December 12, 2019 that with the launch of Khelo India Scheme, there has been increased awareness and participation of people in sports and Indian athletes have earned accolades in sports such as archery, athletics, badminton, boxing, hockey, shooting, wrestling, weightlifting.

Khelo India Scheme, launched in 2017, aims at infusing sports culture and achieving sporting excellence in the country through its 12 verticals by encouraging sports for all across gender and all age groups to harness the power of sports through its cross — cutting influence. The Ministry of Youth Affairs and Sports supports athletes for training and competition through National Sports Federations and running high quality training facilities.

Sportspersons preparing for participation in international sports events are being assisted for their training and competitive exposures within the country and abroad through Annual Calendar of Training & Competitions. Target Olympic Podium scheme is being implemented since 2014 for meeting the requirements of customized training of medal prospects of mega sports events such as Olympics, Asian games and Commonwealth Games. Further, the Government is supplementing the efforts of the States/UT Governments in bridging the gaps in sports infrastructure under Khelo India Scheme.

Performance of sportspersons in international events is dependent on the stage of development of sports in a country. Stage of development of sports in terms of sports infrastructure, training/coaching methods, sports science etc., in some Asian countries such as China, South Korea and Japan is of different level. With the launch of Khelo India Scheme, there has been increased awareness and participation of people in sports and Indian athletes have earned accolades in sports such as archery, athletics, badminton, boxing, hockey, shooting, wrestling, weightlifting.

Chart shows budget allocation and expenditure including for infrastructure development, of the Department of Sports during last six years.