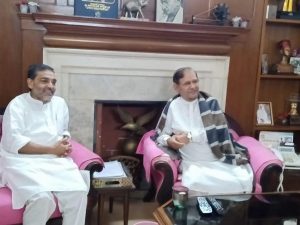 Kushwaha preferred to go public with his discomfort at the “equal seat-sharing” deal between the BJP and JD(U).

Kushwaha visited Sharad Yadav at his home in Delhi. He tweeted later that it was a courtesy call, but that did not set speculation at rest.

On November 2, BJP president Amit Shah had announced the seat-sharing deal after a meeting with JD(U) president and Bihar Chief Minister Nitish Kumar.

Kushwaha had accused Nitish Kumar of trying to poach his two MLAs in Bihar assembly.

The relationship between Kushwaha and Nitish Kumar’s party touched a low after it emerged that the BJP and Nitish Kumar may contest an equal number of seats in Bihar in 2019 election.

In the 2014 Lok Sabha elections, the NDA won 31 out of 40 seats in Bihar. The JD(U) which parted ways with the NDA just before the polls could manage just two seats, LJP had contested seven seats winning six of them and Kushwaha’s RSLP had won in three constituencies. With Kumar’s return to NDA fold, Kushwaha does not want to give up seats for JDU.

The meeting between Kushwaha and Sharad Yadav has created speculation that he might be exploring alternatives for 2019 Lok Sabha election. He has been meeting Opposition leaders in Bihar including Tejashwi Yadav, the son of RJD chief Lalu Yadav.

Khandwa jailbreak: The men of the not-so-great escape