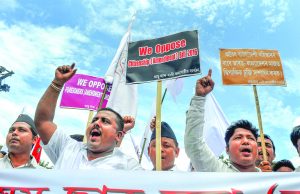 With the Union Cabinet approving the Citizenship (Amendment) Bill, the Union Government has taken a major stride towards fulfilling its poll promise of granting Indian citizenship to Hindus, Sikhs, Jains, Buddhists and Christians escaping persecution from neighbouring countries. Alongside other issues, this too was a poll plank of Bharatiya Janta Party before the elections.

The Union Cabinet has approved the Citizenship Amendment Bill. The Cabinet approval was crucial as the ruling Bharatiya Janata Party has been strongly advocating a nationwide National Register of Citizens (NRC) exercise before the 2024 Lok Sabha polls. Home Minister Amit Shah has linked the passage of the Bill with a nationwide National Register of Citizens (NRC), suggesting that even if the Assam NRC erred in leaving out some non-Muslims, the Citizenship (Amendment) Bill would fix the error.

This is the reason those who support the Bill opine that the government is trying to correct a historic wrong. However, this is debatable as all political parties have their compulsions for speaking in favour of against the Bill. Notwithstanding their stand, the BJP has tried to fulfill a promise made through this Bill.

The Bill aims to provide citizenship to those who had been forced to seek shelter in India because of religious persecution or fear of persecution in their home countries, primarily Hindus, Sikhs, Jains, Buddhists, Parsis and Christians from Afghanistan, Pakistan and Bangladesh. This is a drastic shift from the provisions of the Citizenship Act of 1955 that labels a person an “illegal immigrant” if he or she has entered India without travel documents or has overstayed the date specified in the documents.

Analysts say that the primary beneficiaries would be non-Muslim refugees from Pakistan, Bangladesh and Afghanistan, whereas Muslim immigrants such as Myanmar’s Rohingya face the prospect of deportation. Thre was an uproar before the Cabinet clearance as the opposition had been opposing it. The Cabinet nod comes a couple of days after Home Minister Amit Shah virtually set the agenda for the next General Election by declaring that every infiltrator would be identified and expelled by 2024.

The Bill seeks to amend the Citizenship Act, 1955 to make illegal immigrants who are Hindus, Sikhs, Buddhists, Jains, Parsis and Christians from Afghanistan, Bangladesh and Pakistan, eligible for Indian citizenship.

The Citizenship (Amendment) Bill, 2019 proposes to considerably ease these conditions. It seeks to nearly half — from 11 to not less than 5 years — the period required to stay in India for claiming citizenship, even after illegally entering India. The amendment will allow Hindus, Sikhs, Buddhists, Jains, Parsis, and Christians from Bangladesh, Afghanistan and Pakistan to become Indian citizens, even if they have entered illegally.

It implies that Hindus, Sikhs, Buddhists, Jains, Parsis and Christians from Afghanistan, Bangladesh and Pakistan, who arrived in India on or before December 31, 2014 will not be deported or imprisoned for being in India even if found to be living without valid documents.

Under The Citizenship Act, 1955, one of the requirements for citizenship by naturalisation is that the applicant must have resided in India during the last 12 months, as well as for 11 of the previous 14 years. The amendment relaxes the second requirement from 11 years to 6 years as a specific condition for applicants belonging to these six religions, and the aforementioned three countries. Under The Citizenship Act, 1955, a person who is born in India, or has Indian parentage, or has resided in India over a specified period of time, is eligible for Indian citizenship.

The Bill assures north eastern states and regions under the Inner Line Permit system (ILP), and those granted autonomous administration under the Sixth Schedule of the Constitution, may be shielded from the Bill, keeping in mind the concerns of the ethno-cultural population in these states. It says that “Nothing in this section shall apply to tribal areas of Assam, Meghalaya, Mizoram and Tripura, as included in the Sixth Schedule to the Constitution, and the area covered under the inner line notified under the Bengal Eastern Frontier regulation, 1873.”

Initially, the Bill was tabled in Lok Sabha on July 19, 2016, and was referred to a Joint Parliamentary Committee (JPC) on August 12, 2016. The Committee submitted its report on January 7, 2019 and, the following day (January 8, 2019), the Bill was passed in Lok Sabha. With the 16th Lok Sabha nearing the end of its term, the government was racing against time to introduce it in Rajya Sabha. However, massive protests against the Bill in the Northeast acted to restrain the government, and Rajya Sabha adjourned sine die on February 13, 2019, without the Bill being tabled.

The main opposition to the Bill comes from the apprehensions that the Assamese speaking will be reduced to a statistically weak minority in their own state.  Then there is question of the political rights of the people as migration has been a burning issue in Assam.

Assam has just gone through the National Register for Citizens (NRC) exercise which was carried out under the supervision of the Supreme Court. The first draft of the NRC was released on December 31, 2017 and the second final draft was published on July 30, 2018. Of 3.29 crore applicants, 2.89 crore people made it to the final draft leaving out 40.07 lakh people.

The final NRC list, published on August 31, 2019, excluded over 19 lakh applicants. They are fighting for their cases in Foreigners Tribunals. The Bill empowers the Centre to prescribe the condition, restrictions and manner in which such a person will be registered or naturalized. It provides ‘immunity to persecuted minorities from any proceedings regarding illegal migration or citizenship before any authority, including foreigners’ tribunals and courts.

Those who support the Bill say that the Narendra Modi government is correcting a ‘historical wrong’ through the exercise. To them, the genesis of NRC is not in communal politics, but in the vote-bank politics of Congress regimes in the 1960s and 1970s, which compromised both the interests of indigenous people in Assam as well as national security.