The restrictions were eased to allow people in Kashmir to offer Friday prayers in local mosques, officials said on Friday.  However, security forces were put on high alert across the Valley in an apparent move to prevent possible protests.

Some schools have reopened in few districts and people could be seen coming on to the roads in some areas.

According to the sources, there will be no Friday congregation at the historic Jama Masjid.

The prohibitory orders were clamped five days ago to prevent possible protests over the central government move to revoke special status for Jammu and Kashmir and split it into two union territories—Ladakh and Jammu and Kashmir.

Prime Minister Narendra Modi on Thursday in his address to nation said that his government has taken a historic decision on Jammu and Kashmir by revoking Article 370. The dreams of everybody from Sardar Vallabhai Patel to BR Ambedkar, SP Mookerjee, Atal Bihari Vajpayee and crores of Indians have been fulfilled. 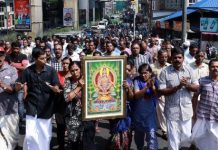