AAP leader and Delhi Deputy Chief Minister Manish Sisodia on Monday alleged the BJP has led the country to such a situation that even “small countries are now challenging the great nation of India”.

He claimed that every Indian is pained by it and “the sorrow is endless”.

Sisodia’s remarks came after the Organisation of Islamic Cooperation (OIC) slammed India for comments by two BJP functionaries against Prophet Mohammad and even urged the UN to take necessary measures to ensure that the rights of Muslims are protected.

Saudi Arabia, Qatar, Iran and Kuwait expressed their condemnation of the controversial remarks against the Prophet and called for “respect for beliefs and religions.”

Pakistan summoned the Indian charg d’affaires to convey its categorical rejection and condemnation of the controversial remarks by the two BJP leaders.

As the row escalated both domestically and abroad, the BJP on Sunday suspended its national spokesperson Nupur Sharma and expelled its Delhi media head Naveen Kumar Jindal.

The party also issued a statement asserting that it respects all religions and strongly denounces insults of any religious personality.

Grabbing the opportunity to take a potshot at the BJP, Sisodia, in a tweet in Hindi, said, “Even small countries are challenging the great nation of India.

Sharma’s comments, made in a TV debate nearly 10 days ago, and Jindal’s now-deleted tweets sparked a Twitter trend calling for a boycott of Indian products in some countries.

Qatar and Kuwait summoned the Indian ambassadors and handed over to them protest notes on what the Gulf countries called categorical “rejection and condemnation” of the controversial remarks of the BJP leader against Prophet Muhammad. 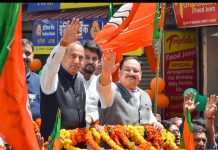