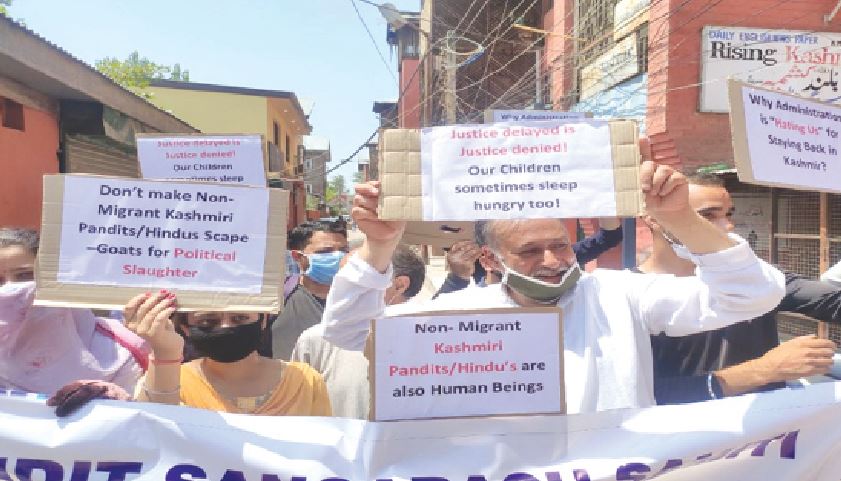 THIRTY years is too long to live in trauma. Our voice has fallen to deaf ears. We are caught between the devil and the deep sea,” says Mohan Lal Bhat, who along with his family stayed back in Valley and braved all odds in all these years of turmoil.

“I don’t know why I stayed back in Kashmir while my neighbours were packing their bags for some unknown destination on the gruesome night of January 19, 1990. My attachment with my land, home, my orchards, and moreover those mute domestic animals, who had been altogether with me all my years of life, made me stop from moving from Valley. But now I repent on my decision because we have been cheated by all the successive governments,” Gunwati, who along with her son and his family stayed back in South Kashmir and struggling for their livelihood.

While Gunwati’s family is facing worst ordeal in Kashmir, being non-migrant, miles away in Jammu’s biggest camp at Jagti, her sister Umashori longs to go back to her roots and awaits for government’s return and rehabilitation policy.

It is worth mentioning here that over three lakh-odd Kashmiri Pandits who had to flee Kashmir Valley in the wake of terrorism in 1989-90, reduced to living the lives of ‘ migrants’, despite being Internally displaced persons,’ outside the Kashmir. In what appears to be a flicker of a moment, they lost almost everything that their lives were based on — their roots, identity, homes, possessions and, most painful, their sense of belonging. Their memories are full of the trauma and tragedy of being uprooted.

Ironically, the tragedy of Kashmiri Pandits, both who left Kashmir and those who stayed behind, remained underreported and their plight continues to be an intricate one. The non-migrant Kashmiri Pandit community in the Valley are in dire need of relief. Non-implementation of employment schemes has resulted in financial hardships for community members. Despite judgement of the Jammu and Kashmir High Court on October 2016 on the subject of employment schemes for the community, these schemes are yet to see the light of the day.

Even after 30 years, Kashmiri Pandits are still at the crossroads. Ironically, successive Governments have failed to settle down this minority community to the place of their origin-Kashmir.

“We, the non-migrant Kashmiri Pandits, have become invisible for the administration and are miserably neglected,” says Sanjay Tickoo, the president of the Kashmiri Pandit Sangharsh Samiti (KPSS), adding, “Post abrogation of Article 370 and now the Covid lockdown has left us in the lurch. Almost 500 people still await government appointments although the high court granted approval for the same. We are facing the worst situation in absence of any financial support”.

It is noteworthy that KPSS has sent over 110 memoranda since June, indicating the urgency of the situation, the last on August 12. Following this KPSS had a meeting with J&K Lieutenant Governor Manoj Sinha on August 27 who had then assured that action would be taken on their demands but when the administration failed to fulfil their demands, KPSS members led by Tickoo went on an indefinite hunger strike on September 20.

“Our voice has fallen to deaf ears, No government machinery has ever visited us to mitigate our problems,” says Mohan Lal, who is now unable to feed his family.

According to the estimates put by KPSS, as many as 808 non-migrant Kashmiri Pandit families are presently living in 242 areas across the Kashmir valley and did not migrate after the eruption of militancy more than 30 years back. Of which around 51 families are displaced within the Valley due to the security reasons to safer environs where they are putting up in rented accommodation in Srinagar.

Post abrogation of article 370 and 35A, these 808 non-Kashmiri Pandit families are facing worst ordeal in absence of implementation of employment package and financial assistance. They had filed a case in 2013 in the High Court for the inclusion of non-migrant Pandits in the Prime Minister’s rehabilitation package for Kashmiri Pandits.

Despite the October 2016 judgement of the Jammu and Kashmir High Court, on a petition by Tickoo, asked the government to consider the demands of these non-migrants, the state government included them in the 2008 Prime Minister’s return and rehabilitation scheme and agreed to recruit 500 non-migrant youth. But so far the judgement has not been implemented.

“Unfortunately, nothing moved in the administration to resolve our demands,” says Sanjay Tickoo, the president of the Kashmiri Pandit Sangharsh Samiti (KPSS), who was on fast unto death on demands at the 200-year-old Ganpatyar Temple in Srinagar since September 20. “On September 30, the Deputy Commissioner, Srinagar, visited the venue of the fast and handed over a written assurance that their charter of demands would be placed before the government for consideration on priority and a meeting with KPSS would be organised,” he said.

On October 5, a delegation of KPSS led by Sanjay Tickoo met Baseer Khan, the advisor to the LG and the meeting took place in the presence of the Deputy Commissioner, Srinagar. The Advisor promised that the demands would be considered within a week and final meeting will be called with functionaries of KPSS soon. Since then, the Samiti is awaiting for the final meeting but it never took place, forcing them to go for the second phase of agitation.

KPSS president Sanjay Tickoo alleged that since the abrogation of Article 370 and 35 A, the non-migrant Kashmiri Pandits were facing harassment at the hands of the J&K government. Despite multiple directions from High Court and recommendations from the Centre through the Ministry of Home Affairs, Relief Department is playing with the life and security of the non-migrant Kashmiri Pandits living in Kashmir Valley.”

“A notable exception was former Chief Minister Mehbooba Mufti and former Home Minister Raj Nath Singh, who Tickoo says prevailed over bureaucrats to implement the provisions in October 2017, but matters came to a standstill when the state was placed under governor’s rule in 2018. Even now, 500 plus Kashmiri Pandit youth are still eligible for jobs under the scheme, which is yet to be implemented,” he added.

“Our youth are turning over aged now and it is getting difficult for them to feed their families in absence of jobs”.

“We strongly feel that the Disaster Management Relief, Rehabilitation and Reconstruction (DMRR&R) Department is punishing left out (non-migrant) Kashmiri Pandits – Kashmiri Hindus for staying back in Kashmir. Since the abrogation of Article 370 and 35 A, we are facing harassment and isolation at the hands of the Relief Department. Despite multiple directions from the High Court and recommendations from the Central Government through the Ministry of Home Affairs, Relief Department is playing with the life and security of the Non-Migrant Kashmiri Pandits,” said Sanjay Tickoo, who had to suspend fast unto death protest as his health deteriorates. He said he will start the agitation again soon.

He said though the Centre acknowledges their existence in Kashmir Valley and is making recommendations to the UT of Jammu and Kashmir, some local politicians of the ruling party are sabotaging every process.

A large number of Kashmiri pandits stayed back and didn’t move to Jammu and other parts of the country in wake of the disturbances in the early 1990s. Unfortunately, the employment and financial package for the pandit community, which was announced by the GOI in 2009 does not include non-migrant Kashmiri pandits.

Braving cold and harsh winters, these members of the community sat on fast unto hunger strike to press for their demands and also raised the government’s apathetic attitude towards non- migrant pandit community.

At least 150 of them are Below Poverty Line (BPL) struggling for food and medical care, and nearly 600 youth are unemployed. While they had earlier qualified for employment schemes of the government, a delay in implementation of the schemes led 86 of them becoming ineligible due to crossing age restrictions. The KPSS is demanding not only financial aid but also the swift implementation of government employment schemes.

Meanwhile, when contacted Ashwani Chrungoo, in-charge of the Jammu & Kashmir BJP’s department of political affairs, said the issues concerning to non-migrant Pandits are already under process and due to DDC elections, the process got delayed. The SSB has already advertised posts for these non-migrant pandits.

“They (non-migrant pandits) are part of the overall fraternity issues. Their demands would be settled soon,” he said.

Meanwhile, senior BJP leader Ashwani Kumar Chrungoo has urged J-K Lt Governor Manoj Sinha to form a special tribunal to probe crimes against minorities and issue an ordinance to set up a board for management and preservation of temples and shrines in Kashmir Valley.

Referring to the 1999 quasi-judicial order of the National Human Rights Commission (NHRC) that crimes against the Kashmiri Pandits were undoubtedly grave, Chrungoo said a special crimes tribunal need to be established to investigate the crimes against the minorities of Jammu and Kashmir, including Hindus and Sikhs, over the last 35 years.

He said while the NHRC has registered his complaint and forwarded the same to the Union Ministry of Home Affairs for action on it, the memorandum may be considered a formal complaint against the government of Jammu and Kashmir and also against the government of India, and the NHRC may be made a party as the negotiating adviser on the issue of the constitution of the ‘Special Crimes Tribunal’.

◆ Financial assistance for those still living in the Valley and also the benefits of migrant welfare funds.

◆ Protection, preservation and restoration of temples and other religious institutions belonging to the religious minority in Kashmir Valley.

◆ Extension of the Prime Minister’s job package, filling up of 500 posts and one job per family.

◆ Accommodation for all non-migrant families under the PM’s Relief and Rehabilitation Package.

◆ One time age relaxation to all the over-aged candidates’

◆ Stress-free process of providing bonafide certificates to all the aspirants (Non-Migrant Kashmiri Pandits) as per SRO 425 dated 10.10.2017.

◆ Vigilance inquiry against the officers/officials of the Relief Department for deliberately stalling and sabotaging Relief and Rehabilitation of Non-Migrant Kashmiri Pandits living in Kashmir Valley.