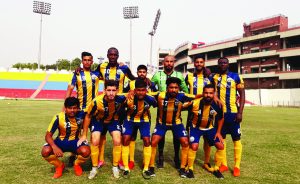 On November 6, history was made at Srinagar’s TRC ground when Real Kashmir FC, J&K’s first football club to qualify for I-League, clashed against Churchill Brothers in their home debut. Though the match ended in a draw but Kashmir won.

More than a simple win or lose game, the match had a profound symbolic significance for the Valley. The Real Kashmir boys had overcome great odds to break into the game’s top flight in India: Beginning around the time of 2014 floods which sunk parts of Srinagar and swathes of North and South Kashmir, the boys also had to grapple with the reigning political turmoil and the violence in the Valley to pursue their dream. And they made it come true, when early this year they beat Hindustan FC 3-2 at Bengaluru, thus becoming the newest team to gain entry into elite I-League. They emerged winners as they secured seven points — from two wins and a draw — from three matches in the final round.

Only the winning team of the second division league is promoted to the I-League. And Real Kashmir FC did it so fast. The team is now playing I-League season 2018-19, its first. And it has already begun it with a bang. On October 31, they defeated the defending champions Minerva Punjab 1-0  in their debut match at Tau Devi Lal Stadium in Panchkula. The win suddenly put the team in national spotlight.

So when the team squared up against Churchill Brothers at Srinagar in what was the first such national level clash, it was a remarkable feat for not only the Real Kashmir but also for Kashmir as well. And as a testimony to this fact, thousands of spectators had turned up to witness the match in freezing weather, among them the youth from the troubled South Kashmir. Only a day prior to the match, it had snowed in Srinagar. But as if to facilitate the match, the sun came out just around the time, the game began. And watching it with pride and a smile on the face was theex-Rangers footballer David Robertson, the Real Kashmir coach.

Robertson, 50, a former player, arrived in Valley in January 2017 and ever since has been tirelessly working on the team and eventually succeeding in turning its performance around. He has himself gone through a transformation: from a reluctant coach who wanted to return home after encountering the travails of living in Kashmir to a man on a mission who wanted to hone the abundant talent of the Valley’s budding footballers.

And with the entry of Real Kashmir into I-League, Robertson’s efforts have richly paid off.

Real Kashmir looks forward to a world of possibilities. The team which wins I-League qualifies for participation in the Asian Champions League. This puts a club on an international map.

Real Kashmir boasts of religious, regional and geographical  diversity. It has Muslims, Sikhs, Hindus and Christians, including Mason, the son of Robertson.

It has local J&K players, those from other parts of India and also some international players, one of them the captain Loveday Enyinnaya who is from Nigeria. He joined Real Kashmir on loan from Minerva Punjab in January.

“There is lot of talent is Kashmir. The players in our team are doing really well,” Enyinnaya said. “I-League will give them more exposure and experience of playing at a national level.”

The I-League is one of the two top football leagues in the country, the other being the Indian Super League. The league is contested by 11 teams and runs from Mid-October to March with the teams playing 20 matches each. With more matches lined up, the next one with the Manipur-based Neroca football club, Real Kashmir is beginning to generate  attention in Kashmir. For once, the people are realizing there is something to celebrate amid the lingering turmoil.