Union Minister Ravi Shankar Prasad will hold round table discussions with prominent leaders of Electronics Industry at Vigyan Bhawan on September 16. The round table discussion will essentially be to brainstorm about the challenges being faced by the Industry, opportunities and expectations of the industry from the Government so that the Indian electronics manufacturing sector can grow at a fast pace.

The Government of India attaches high priority to domestic electronics hardware manufacturing and it is one of the important pillars of both “Make in India” and “Digital India” programmes of the Government. As a result of implementation of several schemes and initiatives for promotion of electronics hardware manufacturing and efforts of the industry, considerable progress has been made in last 5 years, especially in import substitution. Some of the key highlights of the Electronics sector in India include:

There is a significant scope for the growth in this sector with the burgeoning domestic market, which is estimated to reach USD 400 billion by 2025 and the on-going global trade dynamics, especially in the technology space. With its strengths in market, technology talent pool, rapidly growing competitive economy and positioning in global dynamics, India truly holds the potential to become the “Electronics Factory” of the world, the statement said.

National Policy on Electronics 2019 envisions positioning India as a global electronics hub by encouraging and driving capabilities in the country for developing core components (including chipsets) and creating an enabling environment for the industry to compete globally.

Around 50 Industry leaders have confirmed their participation in the round table to deliberate upon the mutual expectations from the Government and the Industry, to achieve the true potential of domestic electronics manufacturing and the measures required to achieve it. Representation has been confirmed from all the major verticals of the electronics sector such as mobile handsets, consumer electronics, strategic electronics, medical devices, Information Technology, electronic manufacturing services, electronic components, telecom and LED lighting, among others, it said.

While the Union Minister will spell out his vision for the sector in the coming years and will encourage the CEOs to place on the table their commitment to that vision, he will also have an open minded engagement with the CEOs about their expectations from the Government to help them meet their commitments, the statement said. 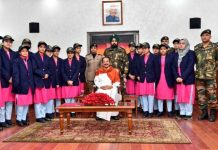