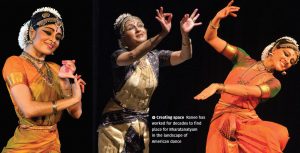 When in 2012 the then President Obama appointed Twin city based Bharatnatyam dancer and choreographer Ranee Ramaswamy, in a move that “came out of the blue for me” she says, as one of the members of the National Arts Council that advices the National Endowment for the Arts, few could imagine how the story began or played out — partly in India and partly in the USA. Even though Ranee loved to dance ever since she began to learn dance even as a little child, she went in to dance seriously only at the age of 26, recalling to mind another late bloomer in dance — Protima Gauri Bedi.

Landing in Minnesota as a young immigrant wife, mother to a three year old daughter, Aparna, in 1978, even though only with the mandatory four hundred dollars that the Indian government then permitted, Ranee’s life seemed to go the way the family astrologer had predicted. Here as a member of the Tamil Association she was invited by its President to dance for the Diwali event held at University of Minnesota’s Coffman Hall. With a $25 tape recorder playing out two classical compositions of M.L. Vasanthakumari, Ranee put up a show that earned her requests to teach the children of the Indian diaspora. Thus began a slap dash career of going to India and learning enough to continue to teach kids, including her daughter.

Then in 1983 she chanced to see the renowned dancer Allarmel Valli, perform on a Minnesota stage changed Ranee’s life. “I had never seen anything like that. Vallis’ dance was brilliant and soul stirring” recalls Ranee of the magical moment. Both mother and daughter registeredd for Vallis’ two week workshop, but the first challenge was just a day away for after the first class itself Valli asked Ranee to demonstrate. “For me it was like I was dancing at Kennedy Centre”, recalled Ranee with brilliant eyes. She agreed to make Aparna her student, “But I asked her if I could also learn from her,” chimed in Ranee. It was decided there and then that Ranee and Aparna would go to Chennai to train with Valli. “ Every day from 1pm to 8 pm we would train with her privately between September to January, learning everything from scratch, and then eventually joined the other students to learn the items” recalls Aparna who went on to become Valli’s first student to do an arangetram- the professional debut, in 1988. “She made me realize the enormous responsibility on me to carry forward her teaching. I knew I had to dance like an Indian. She remains our role model compass and barometer”, admits Aparna speaking for herself, her mother and younger sister Ashwini.

Unlike Aparna, Ashwini was born in USA. By the time she reached childhood there was dance aall around her, a fact that “didn’t allow her a childhood”. When she was twelve, Ragamala, the world renowned Dance Company that her mother set up, came into being. Ashwini tried her hands at many things, like theatre, singing and even skiing- anything but dance. “I was a book publicist in New York when the Ragamala dance company came to perform in a series of shows at some of the most prestigious venues there. That is when the call came to me,” admits Ashwini. And now mother and two dancers perform every day, in small towns across Minnesota, cities across the USA and important dance centres around the world.

All three of them are McKnight awardees. The McKnight Foundation via its generous and ‘no strings attached grants’ have made huge investment amongst dancers of the state. This is a reflection of the openness with which the community of Minnesotans have embraced their art and supported this non western form. Ranee is a recipient of the United States Artistes fellowship, and the Doris Duke Performing Artist’s award, as is Aparna independently. Aparna has the Joyce award, the Bush fellowship for choreography and was named as one of “25 to Watch” by Dance magazine in 2010.

In 1990 Ranee met the American poet, essayist, activist, and leader of the mythopoetic men’s movement, Robert Bly, who had translated some poems of Meera that portrayed her as a strong independent woman. On a whim, after reading them, Ranee called him up and asked if he would read them while she danced? “Amazingly, he said yes, and Mirabai Versions was premiered in 1991. With poems in English and music by local musicians, it made Indian dance more accessible to western audiences outside the Indian community”, recounted Ranee. Another highlight was ‘Body and Soul: A Tribute to Billy Holiday” a collaboration with local jazz musicians, inspired by the fact that “to me Holiday’s music reminded me of Tamil Padams, songs of love and loss of anger and jealousy” described Ranee. For the Walker Centre, curator Philip Bither commissioned Ragamala dance Company in 2004, to work on a choreography called ‘Sethu’ using over fifty dancers, many from Bali, where also the Ramayan story is well entrenched, albeit with some differences. “She makes the unlikely and irreconcilable possible and beautiful” was Bither’s comment about Ranee on that occasion! Even mentor and guru, Alarmel Valli acknowledges that “They have done much to take our dance to mainstream circles”.

For Ranee, every cross cultural collaboration starts with a deep personal journey into her own tradition. This is something she owes to her daughter Aparna, she says. “I wanted to go out and Aparna kept showing me the possibilities of within the tradition. We combined both impulses and we met the other art forms but in an India centric perspective”. So using this as a fulcrum they created ‘Sacred Earth’ a combination of Warli paintings, Kolam (rice flour) designs, multi disciplinary visual art, poetry, music and dance. Deeply researched it used five poems from the Sangam era, that talked about the everyday as did the paintings that would fly up and down the side screens. On the central screen the appearing and disappearing images of the kolams being simultaneously created on the floor were being projected. The dancers’ foot work would erase the kolams, soon after they were made, as if to suggest the transitory nature of life! ‘Sacred Earth’ which was made with funding from the National Dance Project and the National Endowment for the Arts, has had seventy performances already including thirty in one year alone. Another memorable choreography of theirs with a deep philosophical meaning is ‘Written in Water’ based on the traditional Tamil game of Snakes and ladders but interpreted to represent the heights of ecstasy and the depths of longing in Hindu and Sufi thought.

Most recently, a creative residency in June at the Rockefeller Foundation’s Bellagio Center in Italy, allowed the mother and daughter team of Ranee and Aparna to craft their new work, “Body, the Shrine,” described as “an exploration of the mythography of the intimate and the infinite,” which will mark the silver jubilee of the Ragmala Dance Company. “It is not often that a mother and daughter can work side by side, arm in arm, to create an artistic product, to run a business, to achieve a vision. We are excited each day to see each other and follow our dreams together. It is only a visionary and extraordinary person who can make this a reality”, acknowledges Aparna co-artistic director and principal dancer of the Ragmala Dance Company of her mother who has been described as determined, brave and generous by many, and by her sister Ashwini, director of marketing and dancer with the Company, simply as a “Superhero”!