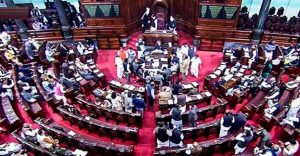 The (124th Amendment) bill 2019 to provide 10 per cent reservation in jobs and education to economically weaker sections in general category was passed in Rajya Sabha on Wednesday.

After hours long debate, most of the members in the Upper House of the Parliament agreed to go ahead with the bill despite opposition from some parties.

The general category reservation bill was passed by Lok Sabha on Tuesday with 323 members voted in favour of the Constitution (124th Amendment) Bill 2019, and three voted against it.

Although the Congress party supported the bill in Rajya Sabha but raised question over its timing and implementation.

Congress Rajya Sabha member Anand Sharma alleged that the government brought the bill with an eye on upcoming general elections.

AIADMK member Navneet Krishnan opposed the bill and said that the Bill violated the basic structure of the Constitution. “Reservation is only for those who faced social discrimination and not for economically poor.”

He tweeted, “With passage of the Constitution (124th Amendment) Bill, 2019 by Rajya Sabha, a historical reform for equality and equal opportunity has come into existence. Govt. accomplishes its commitment to #SabkaSaathSabkaVikas #NewIndia.”

Prime Minister Narendra Modi lauded the passage of the Constitution (One Hundred and Twenty-Fourth Amendment) Bill, 2019 in the Rajya Sabha.

“Delighted the Rajya Sabha has passed the Constitution (One Hundred And Twenty-Fourth Amendment) Bill, 2019. Glad to see such widespread support for the Bill. The House also witnessed a vibrant debate, where several members expressed their insightful opinions,” he said.

Modi further said, “Passage of The Constitution (One Hundred And Twenty-Fourth Amendment) Bill, 2019 in both Houses of Parliament is a victory for social justice. It ensures a wider canvas for our Yuva Shakti to showcase their prowess and contribute towards India’s transformation.”

“By passing The Constitution (One Hundred And Twenty-Fourth Amendment) Bill, 2019, we pay tributes to the makers of our Constitution and the great freedom fighters, who envisioned an India that is strong and inclusive”, the Prime Minister added.

Vice-President Venkaiah Naidu said, “I compliment both the Houses of Parliament for passing the historic constitutional amendment bill to provide 10 per cent quota for economically backward sections in educational institutions and employment”

“It fulfils long-felt need and is a step towards social cohesion. It helps in upliftment of economically backward sections,” he added.