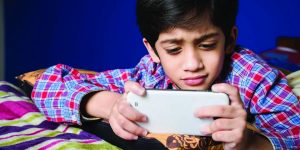 The 14-member Committee including seven women members of Rajya Sabha has suggested mandatory apps to filter children’s access to pornography content. The Committee instituted by Rajya sabha Chairman M. Venkaiah Naidu has made 40 recommendations to prevent sexual abuse of children and to contain access to pornographic content on the social media.  The Committee was set up by Venkaiah Naidu on December 12 last year further to some members voicing concern over widespread misuse of social media for accessing pornographic content and child abuse.

In its report presented by Chairman of the Committee Jai Ram Ramesh, the Committee has expressed concern over the seriousness of the prevalence of the horrific social evil of child pornography. It has recommended important amendments to the Protection of Children From Sexual Offences Act, 2012 and the Information Technology Act, 2000 besides technological, institutional, social and educational measures and state level initiatives to address the alarming issue of pornography on social media and its effects on children and the society as a whole.

The Committee heard the views of the Ministries of Women and Child Development, Electronics and IT and Home Affairs besides NCPCR and Telecom Regulatory Authority of India and other stakeholders like Google, Facebook, Whatsapp, Bytedance(TikTok), Twitter and Sharechat. The Committee also received representations from 3 NGOs viz., HERD Educational & Medical Research Foundation, Nagpur, Centre for Child Rights, New Delhi and Internet Freedom Foundation, New Delhi. Jairam Ramesh in the Report of the Committee stated that it is a good model that can be followed from time to time to get members of Rajya Sabha to deliberate on pressing social issues.

The 40 recommendations made by the Adhoc Committee relate to adoption of a broader definition of child pornography, controlling access for children to such content, containing generation and dissemination of Child Sexual Abuse Material (CSAM), making accountable the Internet Service Providers and online platforms for denying access to children and removing such obscene content from online sites besides monitoring, detection and removal of content, preventing under-age use of such content, enabling parents for early detection of accessing such content by children, enabling effective action by the governments and authorized agencies to take necessary preventive and penal measures etc.

Noting that the purveyors of child pornography seem always to be one step ahead of the regulators, the Committee stressed on the need for implementation of its recommendations as an integrated package of measures and not piecemeal to have any value and impact. The Committee has broadly sought to address the issue of access of children to pornographic material on social media and circulation of pornographic material on social media in which children are abused.

The Committee has recommended some important amendments to the POCSO Act, 2012 and the IT Act, 2000 with corresponding changes to be carried out in the Indian Penal Code;

A clause to be inserted in the POCSO Act, 2012 under which advocating or counseling sexual activities with a person under the age of 18 years through any written material, visual representation or audio recording or any characterization is made an offence under the Act;

Another clause to be inserted in the POCSO Act, 2012 prescribing a Code of Conduct for intermediaries (online platforms) for maintaining child safety online, ensuring age appropriate content and curbing use of children for pornographic purposes;

Under the POCSO Act, 2012, school management should be responsible for safety of children within schools, transportation services and any other programmes with which the school is associated;

A new section be included in the IT Act 2000, providing for punitive measures for those providing pornographic access to children and also those who access, produce or transmit Child Sexual Abuse Material(CSAM);

Union Government shall be empowered through its designated authority to block and/or prohibit all websites/intermediaries that carry child sexual abuse material;

IT Act to be modified making intermediaries responsible for all measures to proactively identify and remove CSAM as well as report it to Indian authorities as well besides the foreign authorities. Gateway Internet Service Providers (ISP’s) must bear a significant liability to detect and block CSAM websites. Intermediaries shall also be responsible to report to the designated authority, IP addresses/identities of all those searching/accessing child porn/CSAM key words;

Law enforcement agencies must be permitted to brake end to end encryption to trace distributors of child pornography. Apps that help in monitoring children’s access to pornographic content shall be made mandatory on all devices sold in India. Such Apps or similar solutions to be developed and made freely available to ISP, companies, schools and parents;

Ministry of Electronics and IT and Ministry of Home Affairs shall coordinate with Blockchain analysis companies to trace identities of users engaging in crypto currency transactions to purchase child pornography online. Online payment portals and credit cards be prohibited from processing payments for any pornographic website;

All social media platforms should be mandated with minimum essential technologies to detect Child Sexual Abuse Material besides regular reporting to law enforcement agencies in the country;

Social media shall have mechanism for age verification and restricting access to objectionable/obscene material;

The Committee recommended an upgraded and technologically empowered National Commission for Protection of Child Rights(NCPCR) to be designated as the nodal agency to deal with the issue of child pornography. NCPCR should have necessary technological, cyber policing and prosecution capabilities;

The National Crime Records Bureau (NCRB) shall mandatorily record and report annually cases of child pornography of all kinds. A national Tipline Number should be created where child sexual abuse as well as distribution of child pornographic material can be reported by concerned citizens;

Ministries of Women and Child Development and Information and Broadcasting shall launch campaigns for greater awareness among parents to recognize early signs of child abuse, online risks and improving online safety for their child. Schools shall undertake training programmes for parents at least twice a year, making them aware of hazards for children of free access to smart phones, internet at an early age. Based on the experiences of other countries, a proper practicable policy for restricting use of smart phones by under aged kids needs to be considered;

The committee recommended that each State and Union Territory shall have empowered State Commission for the Protection for Child Rights mirroring capabilities and capacities of the NCPCR. E-safety Commissioners be appointed at state level to ensure implementation of social media and website norms relating to removal of pornographic content, age verification, issuing warnings etc.