With the objective to promote ‘Make in India’ in Defence sector, Union Minister Rajnath Singh will interact with top Defence and Aerospace Industry leaders at Vigyan Bhawan Annexe on Friday. ‘Make in India in Defence Industry Roundtable’ is organised by Department of Defence Production, Ministry of Defence (MoD). It aims to explore ways to attract investment, address the concerns of the industry and promote innovations in Defence sector.

The MoD has taken several steps to ease licensing, promote exports and Foreign Direct Investment (FDI) in the Defence sector.

The process of acquiring defence industrial licence has been eased to significantly enhance ‘Ease of Doing Defence Business’.

To promote defence exports, 668 No Objection Certificates were issued to companies during 2018-19. Steps have been taken to rationalise the Standard Operating Procedure (SOP) for reducing the time taken for granting permission for exports. The average time taken has reduced by 100 per cent to 32 days now. Defence exports have recorded a substantial rise to Rs 10,745 crore in 2018-19 from Rs 4,682 crore in 2017-18.

‘Make in India’ portal for Defence Production has been revamped and re-launched. A new portal, www.defenceexim.gov.in  has been created for end-to-end processing and communication of export license applications and generating and disseminating export market leads.

In addition, the MoD launched a dashboard to keep track of the major components of Defence Production, including defence exports, defence offsets, defence projects under ‘Make in India’, startups in defence sector, investments in defence corridors in Uttar Pradesh and Tamil Nadu and artificial intelligence projects in defence.

The interaction of industry leaders with Rajnath Singh will provide an opportunity to discuss new and innovative proposals in defence production and exports. 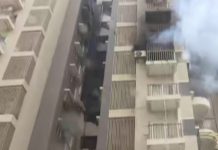