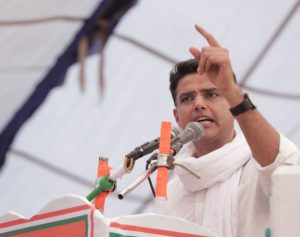 Rajasthan Congress Chief Sachin Pilot on Tuesday alleged that the farmers in the state were dying but Chief Minister Vasundhara Raje was busy in her ‘Gaurav Yatra’.

While addressing a public meeting in Sangod town of Kota district, Pilot said the Raje is a lioness, but her biggest hunt is farmers.

“The moong daal is being sold at Rs 125 per kg, the prices of petrol and diesel are skyrocketing while the farmers were not able to sell their crop at the government-support price,” he added.

The 41-year-old, on the occasion, acknowledged that he certainly had to learn a lot, but in politics, he would give Vasundhara Raje such a defeat in the upcoming assembly elections that she would not be able to forget it for a long time.

Former ministers Bhanwar Lal Meghwal, Bharat Singh, Shanti Dhariwal among others were also present at the event and addressed the public function.

Pilot said that Raje has lost a good opportunity as she was having a chance to develop the state because her party was in power in the Centre too.

Rajasthan Assembly Elections 2018 are likely to be held at the end of this year.