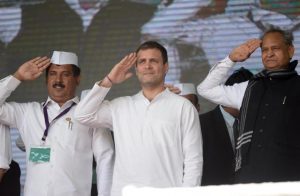 While addressing the gathering, Rahul said, “We need to start a new beginning need to be strengthened. We should understand that we cannot fight BJP’s hate with hate. I hugged Modi to remove that hatred.”

“Modi said, India was a sleeping giant before 2014. He means that Pt. Nehru, Dr Ambedkar, our farmers, small businesses did not do anything before him. He is not insulting Congress by saying this but insulting the people of this country. BJP-RSS believe that India is a product that should benefit a handful of their richest friends,” Rahul said,

While talking about farm loans, Rahul said, “We waived off farm loans in Rajasthan, MP, Chhattisgarh, Karnataka and Punjab, whereas Modi waived off loans worth ₹3,50,000Cr of people like Anil Ambani, Nirav Modi, Mehul Choksi.”

“Congress party believed in justice, but BJP does not get affected if farmers commit suicide or people have to stand in queues during Demonetisation. Their sole intention is to benefit India’s richest,” Rahul added.

This will be Rahul’s first visit to Gujarat in nearly a year after he led the Congress campaign for the 2017 assembly elections.