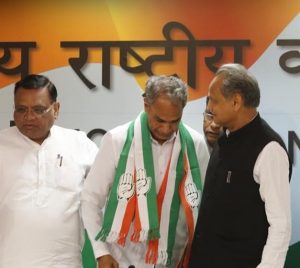 In a setback to the BJP in Rajasthan, ahead of the Rajasthan Assembly elections, party MP from Dausa, Harish Meena joined Congress on Wednesday.

Meena, a former Director General of Police, had joined BJP in 2014.

He was welcomed by State Congress chief Sachin pilot and former chief minister Ashok Gehlot, both of whom have decided to contest the state assembly elections scheduled to be held on December 7.

“I am happy that Harish Meena has decided to join the Congress in such times. I welcome him in the Congress fold,” said Ashok Gehlot at a press conference.