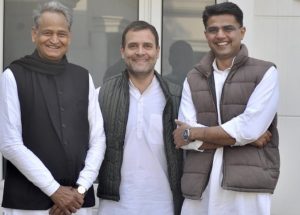 Senior Congress leader Ashok Gehlot has been chosen as the Chief Minister of Rajasthan while Sachin Pilot has been given the charge of deputy chief minister.

“The united colours of Rajasthan,” Gandhi said in the tweet along with a photograph of the two warring leaders from Rajasthan with himself.

Rahul Gandhi, who met both the leaders at his residence on Thursday, made his final decision today.

Congress tweeted, “@ashokgehlot51 a stalwart of the Congress party has been elected CM of Rajasthan. We wish him the best as he takes on this new appointment with vigour, sincerity & a commitment to our democratic values.”

Congress also congratulated Sachin pilot for being chosen as a new Deputy Chief Minister of Rajasthan.

“Our best wishes to Shri @Sachin Pilot, the new Deputy CM of Rajasthan. A young & dedicated leader, he is sure to bring development, peace & happiness to the people of Rajasthan,” Congress tweeted.