At least 24 people who were part of a wedding procession were killed while four others sustained injuries after their bus fell into a river in Rajasthan’s Bundi district on Wednesday morning, police said.

The bus with 28 passengers on board was headed to Sawai Madhopur from Kota early morning when it lost control while traversing a bridge and fell down in the Mej River near Papdi village.

Soon after the accident, the locals rushed to the spot to rescue passengers.

According to the sources, thirteen people died on the spot while 10 others succumbed to their injuries on way to hospital.

Rajasthan chief minister Ashok Gehlot condoled the bereaved families who have lost their loves ones in tragic accident.

“I am deeply saddened to learn about the tragic accident in #Bundi in which 24 people have lost lives after the bus fell into river Mej.. My heartfelt condolences to the bereaved families who have lost their loves ones in this tragedy. I wish speedy recovery to all injured,” Gehlot tweeted. 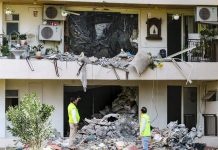