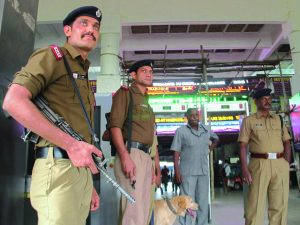 With the rejection of the Central Government’s proposal to amend the Railway Protection Force Act by the States and Union Territories to provide for a single unified command and control system on Indian Railways, the Union Government is now contemplating to integrate the Central Police Forces together with the Railway Protection Force (RPF) for single security command and control on the railways to provide for a better coordinated and effective security  for rail passengers and goods services. In such scenario, RPF may lose its integrity as a dedicated Force to protect railway properties and services.

Proposed amendment to the RPF Act has a serious implications for the States and Union Territories as they would never come on board with the Union Government for a consensus on this issue. Given the current political scenario across the country, even a Chief Ministers’ Conference in this regard does not seem likely to bell the cat. As railway security continues to be in jeopardy, there is no possibility of a breakthrough in beefing up railway
security in the foreseeable future!

In this connection, official sources stated that Policing and Public Order is a State Subject in the Seventh Schedule of the Constitution of India and the Centre has no jurisdiction in the matter. States and Union Territories do not want any dent in their turf by the Union Government with the result security on the railways is not effective for women, general passengers, against sabotage, subversion, untoward incidents, theft, dacoity, loot and other heinous crimes.

As a legacy of British-era policing, a three-tier security system is prevailing over Indian Railways in the form of District Police (DP), Government Railway Police (GRP) and Railway Protection Force (RPF). DP and GRP are State Police on Railways. The RPF is railways own security system, dependent on State policing of railways for controlling crimes on railways. Integrated coordinated measures between the three security agencies are mostly slippery on the ground. Hence, the proposal for a single agency with unified command and control the need of the changing times over the entire railways for an effective security. This is needed for safety and security of passengers, to be addressed properly.

Till such time a single security command and control mechanism is put in place, effective coordination is needed among the RPF, GRP, DP, coach attendants, TTEs, and other Railway personnel connected with security to avoid slippages in security in order to ensure precautionary, protective and preventive measures to secure Indian Railways. Meanwhile, it is learnt officially that Ministry of Railways has advised zonal railways to ensure regular coordination meetings at the level of RPF Post, GRP Thana, Senior Divisional Security Commissioner/Divisional Security Commissioner, GRP and Chief Security Commissioner-Inspector General Police to provide adequate security to passengers and to ensure effective security measures.

Presently, GRP, which is state police and a dumping ground of corrupt, inefficient and unwanted state police personnel, who in GRP milk Indian Railways, rather than control crimes on the railways, allow the crimes to fester to the detriment of rail users. It is to be noted that half of GRP’s salary is borne by the railways, besides establishment cost and accommodation.

RPF has evolved from the old British chowkidari system to the Railway Protection Force under the RPF Act. It was made a Force of the Union by a later amendment in the RPF Act. It’s strength is pegged at 70,000 with a large number of vacancies of more than 10,000 remaining constantly following globalization of the Indian economy since 1991 as the Government decided to curtail manpower year on year except in the wings where it is absolutely necessary to maintain a modicum of manpower strength.

Under the present NDA Government, the rail services have deteriorated drastically. Punctuality of trains has dipped by 35-40 per cent. Railways are losing fast passenger and goods traffic following efficient low cost airliners as well as roadways services. Only glimmer of hope in the current scenario is the upcoming Dedicated Freight Corridors, which when fructified will make the railways profitable.

Meanwhile, a report on financial status of Indian Railways, tabled with the General Budget 2018-19 on February 1, 2018 in Parliament, painted dismal picture of its financial health indicating that the railways have to remain financially viable on borrowed money from market and other sources. As a result of merger of Railways budget with the General Budget since 2017-18, Railways escaped dedicated media focus and for that matter public scrutiny of its overall functioning altogether, the casualty being the impugned report on its financial status from public notice. That is how Indian Railways have lost its sheen in public glare. It comes on the fore in public domain only when accidents take place with heavy casualties

In short, capital expenditure of Indian Railways is increasingly being financed through borrowings from 8 per cent in 2010-11 to 55 per cent in 2018-19, a sorry state of railways financial viability. It is to be noted that private investments in the railways are not forthcoming, said a Railway Board source. It calls for massive investments by the Union Government to maintain balance between commercial status and social responsibility of Indian Railways as the one and only modes of mass transportation of core commodities and bulk of our people who cannot afford other modes of transportation!