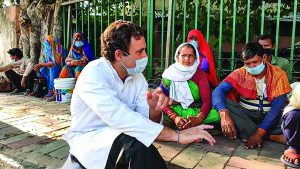 Not a word of apology from the government of the day to our migrant workers  walking from here to there, in those hopeless conditions …desperate to save their lives or whatever remains of it. Mind you, not one of the central ministers has bothered to walk till about the roadside or the highway and publicly and profusely apologise to the grief-stricken fleeing masses.

Instead, the right-wing brigades raised a hue and cry when Rahul Gandhi met and spoke to the migrant workers. He met them out there in the open…as a worried, concerned and earnest leader he wanted to meet them and find out what should be done to ease their trauma in the ongoing conditions.

In fact, the right-wing rulers of the day should have been talking to the migrants and mazdoors on a one- to-one basis. But they didn’t. Perhaps, they opted to sit un-moving from their air-conditioned homes and offices …And when Rahul Gandhi did, what a concerned leader ought to have to done, that is, go down and talk to the aggrieved lot, there was this hungama…Why?

Alas, it did not pay heed to any of the warnings and forewarnings and thereafter only disasters spread out, affecting hundreds and thousands… Not just that, but in trying to camouflage shoddy governance, the right-wing rulers and the godi media under their control have been trying very hard to trample upon any strong voice who dares question and raise some very pertinent points.

It about time to pay heed to what the young leaders are stating …In fact, Rahul Gandhi is commenting like a mature educated leader on the Coronavirus related scenario and the future offshoots that it will drag along in the country. Read and take note of his comments on the Coronavirus; what he has been stating all these weeks or months and you’d realize that he has been absolutely up to date and also been scientific in his approach.

He has been warning of the impending disasters but the rulers of the day drag in only and only politics … Correct me if I’m wrong, but at every possible stage this lot has been putting hurdles in the political graph of Rahul Gandhi, who comes across as earnest and farsighted and down to earth.

In fact, Khushwant Singh was so impressed meeting Rahul Gandhi that he wrote several details of that meeting, in his book — Absolute Khushwant (Published in the summer of 2010 by Penguin) To quote Khushwant from his this book — “Rahul had telephoned sometime last year and said that he wanted to come and see me. He came at the appointed time—4 p.m. — and spent almost an hour in my home. I gave him tea — he said that he’d like some tea — and we spoke of politics; about the current situation in general and other things in particular…I told him, ‘Your cadres are very weak. The BJP has the RSS and the VHP to work for it at the grassroots level. The Congress lacks that.’ He said that he agreed with me and that he was already working on this. He is seeing to it that the party members are trained and the party built up. I see that he has been concentrating on young workers and has picked some very talented youngsters, many of them women. I also told him that during elections voters have to be wooed and drawn towards the party. I said that the most important thing that he should keep in mind is to resist flatterers and to hold back from accepting any portfolio…We didn’t talk about his grandmother or his great grandfather.”

Khushwant had told me (as I was co-authoring this book with him) why he thinks that Rahul Gandhi has the ability and the potential and the capability of leading the country. To quote Khushwant from this book, “He has taken on Mayawati in her own territory. It is a brave thing to do. He himself seems to have no caste or class prejudice .What he has been doing in Amethi, staying with the lowest castes and sharing their food — I don’t think you can criticise him for that. He is not being patronizing; he is highlighting a shameful reality in our country. Even in the 21st century there are untouchables in our society and they live wretched lives …The young Gandhi is becoming a mature leader. Maybe after the next elections (2014), if his party wins, he may agree to become PM. Or he may still choose not to. He has his priorities right — he is not concerned about position and kursi, but strengthening the Congress party.”

But, then, we all saw how the political games of the right-wing rulers came in way — of our masses and their safety! Petty politics was thrown in way even in their transportation, for their safe return to their very native places … And in between it all, shrilly announcements of complicatedly- complex sounding packages which even leading economists find hard to decipher. Not to overlook the new dictates coming in almost every day from the Uttar Pradesh sarkar, in the context of our hapless and helpless mazdoors! What’s taking place!

In fact, whilst on Yogi Adityanath , I must write that there is not just apprehension but also anger cum fear amongst the Muslim community not just in Uttar Pradesh but across the country ever since last week’s news reports that Yogi Adityanath will hold the charge of the Waqf Boards in Uttar Pradesh …Said to be a temporary charge till elections are held for the Sunni and Shia Waqf Boards but only the naïve are going about digesting this official note or footnote . After all, why this delay in holding the required elections to these Waqf boards? Anyway, elections are a formality but then even that formality seems to be getting bypassed! …Also, the Muslim community cannot ever forget those particular sentences of Yogi Adiyanath where he spoke distastefully to say the least, in the context of graves, of those who lie buried in there …Not to overlook the fact that a large number of grave yards in Uttar Pradesh are built on Waqf lands!

This year — 2020 — is sitar maestro Pandit Ravi Shankar’s birth centenary year. He was born a hundred years back — on April 7, 1920, in Varanasi/Benaras, Uttar Pradesh.

But do you know why I have been thinking of Pandit Ravi Shankar in these recent months? Seeing the absolutely deteriorating conditions prevailing around, I’m reminded of what all he’d said …his stark comments.

I had met and interviewed Pandit Ravi Shankar twice. The first time was around the time of his 70th birthday, and as I sat sipping my tea at his Lodhi Estate home, I got so terribly nervous that the entire cup crashed to the carpet of his living room. With that disaster, my nervousness peaked to such an extent that I could barely ask more than the basic, customary questions. But Panditji had simply smiled and tried his best to make me feel at ease…And it was only after a gap that I’d mustered enough confidence to try and meet him again. This was in early 1993. He’d looked frailer and quite sad. He’d told me that he’d been left totally devastated by the recent death of his only son Shubo. That was the time he and his second wife Sukanya were planning to shift base from New Delhi to San Diego, California.

When I asked him why he was moving to the US, he gave me a set of reasons. “The mess in the country is painful for me. Even a place like Delhi is becoming unfit for living. With everything else, the pollution here is killing,” he said. His wife Sukanya who’d stood close by, had added, “The politicians and pollution have finished the city. We have already bought a Spanish villa in California and now I’m doing it up my way.”

To that he’d added, “For me, the house is a very important place. Since I was 10, I have been travelling, living in hostels, so I value my home. That feeling of warmth, coupled with a comfortable middle class lifestyle. Nothing gaudy or vulgar. Somehow, I totally dislike the Delhi concept of showing off. A dignified, balanced and comfortable way of life is what I like.”

He went on to tell me details of the very first house he had built for himself in Benaras. “I don’t know why I decided to build that house in Benaras. Probably because I was born and brought up in that city…and though I’d built it in the early ‘70s, within years I decided to abandon it. All sorts of crude elements had sprung up around me, those decaying values stifled me, so I decided to shift out of Benaras. I’m not a fighter. I’m a musician and I can’t stand vulgar people, besure log.”

In fact, as the couple took me around their Lodhi Estate home what struck all too immediately was the simplicity all around. There wasn’t a trace of any ornate furniture, no porcelain ware, no elaborate bedroom bandobast. In fact, the only room which looked well done up was the music room; with sitars, sur-bahaars, tanpuras neatly placed in stands and the walls of this particular room adorned with prized photographs capturing Panditji with John Lennon, Uday Shankar, Baba Allauddin, Pablo Casals, Mariam Anderson, Pandit Jawaharlal Nehru and Indira Gandhi.

The maestro’s bedroom had only a double bed and a fax machine in it! As we neared the puja room, he told me, “This isn’t just a puja room but my private corner. This is where I meditate, do riyaz, pray. For me, religion is a very personal thing. I am certainly not ritualistic. In fact, like me, most musicians are broad-minded…When I was 18, I went to live with my ustad, Baba Allauddin, and though he was a devout Muslim, his home in Madhya Pradesh’s Maiher was full of photographs of Kali, Krishna, Christ, Mary…music makes you more tolerant. …I only wish our present-day politicians were more musically-inclined; then there’d be more harmony and not the present-day cacophony!”

I recall also asking him why he had ‘Om’ inscribed on the very entrance gates to his home. In fact, he didn’t just explain with words, but he also wrote all those details in my notebook. And this is what he’d written —. “Om or Aum is the primordial sacred sound that has been uttered, chanted and sung by yogis, musicians and the common man for thousands of years. In music, Omkar plays a very important and a very great part. Mian Tansen and his family gave great importance in their singing to the aalap, which starts with the words ‘Hari Om’. This gradually changes to nom, tom etc…To me, as a musician, this sound signifies a deep spiritual vibration, mentally as well as physically.”

Ziya Us Salam’s book on the Tablighi Jamaat

During the lockdown weeks , the New Delhi based journalist — author, Ziya Us Salaam, wrote an entire book, titled — ‘Inside the Tablighi Jamaat’ (Harper Collins ) …Its just launched and as the very title relays it dwells on the Tablighi Jamaat, focusing on the facts and factors to the country’s, if not of the world’s, largest Islamic organization. 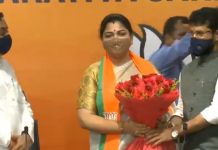