Congress’ Rahul Gandhi’s speech during a debate on the President’s address, focused on 3 main points: creation of two Indias, one rich and one poor; destruction of institutions, and the security threat the nation faces from the coming together of China and Pakistan, writes Amit Agnihotri

Rahul slammed the Centre while speaking during a debate on President Ram Nath Kovind’s address to the joint sitting of the Rajya Sabha and the Lok Sabha on January 31, which marked the start of the Budget session of Parliament.

According to the Congress leader, the Presidential address mentioned a lot of things that the government claimed to have done but didn’t really contain the deeper strategic issues that the country wanted to hear.

His speech focused on three main points, creation of two Indias, one rich and one poor, due to government policies, destruction of institutions, and the threat to national security from the coming together of rivals China and Pakistan.

Highlighting that lack of jobs was affecting the youth, the Congress leader said that there has been a 46 per cent drop in manufacturing jobs in the country and alleged the government had destroyed the unorganised sector. Noting that there were two competing visions of the country, the Congress leader said that India was described as a Union of States and not as a nation. This meant that people from Tamil Nadu had the same right as those from Maharashtra, Uttar Pradesh, Bihar, Manipur, Nagaland, Mizoram or Jammu and Kashmir. The Union of States, he further said, meant it was a negotiation, or a conversation or a partnership and not a kingdom.

The other vision was a centralizing one, the idea of a king, which the Congress had removed at the time of Independence in 1947, the leader said.

“We smashed that idea of a king. Now that idea of king has come back, that there is a king, a Shahenshah, a ruler of rulers, a master of masters. Now, what is happening? Now, Speaker Sir, what is happening as a result of this flawed vision? What is happening, is that the instruments of the conversation between our states. The instruments of the conversation between our peoples, what we call the institutions of our country are being attacked and captured by one idea,” he said.

Talking about Jammu and Kashmir, which became a Union Territory in 2019 and shares border with Pakistan, the Congress leader said the government was fiddling with something extremely dangerous and it demonstrated a complete lack of understanding of history.

Attacking the Centre’s foreign policy, Rahul said: “The single biggest strategic goal of India’s foreign policy had been to keep Pakistan and China separate. This is fundamental for India and what you have done is, you have brought them together. Today, do not be under any illusion.Do not underestimate the force that is standing in front of us. Do not underestimate the power that stands in front of us, do not underestimate it. You have brought Pakistan and China together and this is the single biggest crime that you could commit against the people of India.”

The Congress leader also targeted PM Modi over the alleged snooping by the government through the Pegasus software purchased from Israel.

The Wayanad MP made a passionate speech in which he also referred to the sacrifices made by the Nehru-Gandhi family members.

“My great grandfather (Jawaharlal Nehru) spent 15 years in jail, building this thing, my grandmother (Indira Gandhi) was shot 32 times and my father (Rajiv Gandhi) was blown into bits. So, I understand a little bit about what this country is. My blood has been sacrificed, not by me, by my great grandfather, by my grandmother, by my father for this country, so I understand what it is and you are fiddling with something very very dangerous and I am advising you to stop,” he said. Besides Rahul, the other notable opposition speaker was Trinamool Congress member Mahua Moitra, who made a fiery speech but was asked by BJP MP Rama Devi, who was in the Chair, to cut it down before her allotted 13 minutes were over.

The Chair then called on Kerala MP Mohammed Basheer to speak, despite Moitra arguing that she still had some time left. Later, the TMC lawmaker protested by completing her speech outside the Lok Sabha in front of the media.

“And who is Chair to interrupt me, to lecture me on whether I should speak with gussa or pyar? None of your business madam. You can only correct me on rules. You are NOT the moral science teacher for Lok Sabha,” a furious Moitra tweeted.

She further said that Opposition needed to come together to stop the ruling party from overriding the voices of Opposition MPs.

“I was asking only to complete my last paragraph to tell the Opposition this is why we have to come together. There are 200 seats, in which BJP with all its might have not been able to get more than 50. So, if Opposition comes together, this overriding of voices of people’s representatives is over,” Moitra said.

Speaking in the Lok Sabha, Moitra listed human rights violations during the past few years and noted that the US-based Freedom House Report had downgraded the country’s status from free to partly free, placing India at 111th position out of 160 nations in the Human Freedom Index. She also mentioned that India was at an abysmal 142nd position out of 180 countries in the World Press Freedom Index.

The TMC MP highlighted the year-long farmers’ agitation, the ‘Bulli Deals’ app in which Muslim women were being auctioned and the Pegasus spyware controversy.

“The government stands accused of having spent taxpayers’ money to buy technology to spy for years on its own citizens,” she said, adding “The government has misled even the Supreme Court.”

Moitra also flagged the raids on opposition leaders ahead of elections, targeting of Muslims by Hindu fundamentalists and recent attacks on Christians by the same groups.

She lashed out at the Centre’s attempts to alter the IAS cadre rules and said that the move aimed to “bully” bureaucrats in the states. Moitra claimed that the mention of freedom fighters in the President’s address was mere “lip service”. “Would Netaji Subhas Chandra Bose have approved of a Haridwar Dharma Sansad that issues blood-curdling calls for Muslim genocide,” she said, adding, “Ours is a living constitution, it breathes as long as we are willing to breathe life into it. Otherwise, it is just a piece of paper, black and white, that can be smudged into shades of grey by any majoritarian government.”

The TMC MP also accused the government of seeking to alter history.

When PM Modi responded to the Opposition attack in Parliament, he mostly targeted the Congress party.

The Congress had failed to secure people’s mandate in several states for decades but was still indulging in “blind opposition”, the PM said, adding that the statements and the actions of the opposition party suggested that it had resigned itself to staying out of power for 100 years.

Defending the opposition charge that alleged mishandling of the migrant crisis after the lockdown was announced due to pandemic in 2020, the PM accused the Congress of scaring them at the Mumbai railway station. 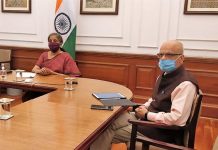