BENGALURU: Congress President Rahul Gandhi today predicted BJPs defeat in 2019 Lok Sabha elections. At a gathering in Bengaluru he said “I’m convinced that Narendra Modi won’t be the next PM in 2019.” “You may laugh at me but post-2019 elections, I would say that it is highly unlikely that the BJP will form a government and that Modi will come to power”
When asked would he be the prime minister in 2019 if Congress emerged as the single largest party. “Yes, why not,” he responded.
Further adding he said “That’s because of the Opposition unity today. Everyone in politics is working to overthrow the BJP,” “This is no longer a tactical political fight but a fight against ideology that everyone will come together against.”
This is not the first time that Congress President made such declaration. Last year in September at UC Berkeley while interacting with students he said that he was absolutely ready to be the congress Prime Ministerial candidate for the 2019 Lok sabha elections.
Today’s comment of Rahul Gandhi gives a clear picture that he is the first and foremost Prime Ministerial choice of UPA for the 2019 Lok Sabha elections. 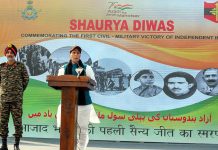