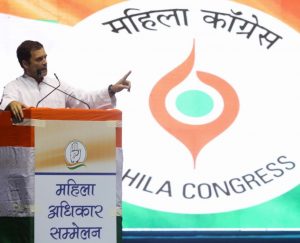 In wake of alarming rise of incidents of sexual abuse at shelter homes meant for girls in Bihar’s Muzaffarpur and Uttar Pradesh’s Deoria, Congress party president Rahul Gandhi on August 7 attacked Prime Minister Narendra Modi for remaining tightlipped on crime against women and children in the country. He said this while addressing at the ‘Mahila Adhikar Sammelan’ in Talkatora Stadium.

Launching a harsh attack on PM Modi, Rahul said, “The Prime Minister speaks on everything, but does not utter a word when crimes are committed against women in Uttar Pradesh and other Bharatiya Janata Party (BJP) ruled states. No action is taken against the accused if he is a member of their party.”

He added, “The PM doesn’t utter a word on the incidents of rape. What happened against women in these four years is something, which didn’t happen even in the last 70 years,”

While continuing his tirade against PM Modi and BJP Rahul said, “They talk a lot but Women’s Reservation Bill is long pending. Congress told them clearly that the entire party will stand by them the day they decide to pass it. But PM doesn’t say anything. They said ‘Beti Bachao Beti Padhao’. Hamein nahi samajh aya beti kisse bachani thi.”

Rahul also talked about women empowerment and underlined that the Congress party was aiming to reserve representations to 50 percent in all spheres. He also urged all women in the country to come forward and contribute to the nation’s development.

He also raises concern over Rashtriya Swayamsevak Sangh (RSS) for its ideology on women empowerment and said that the ideology of BJP and RSS is that only the men will run this country and if it is anywhere that the women belong, it is at the back.

While summing up the address he added that the ideologies of RSS, BJP and PM Modi ravaged the country.