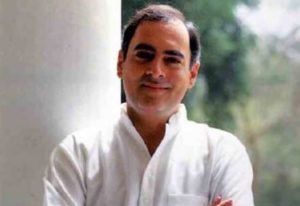 On May 21, 1991, he was assassinated in a suicide bombing at Tamil Nadu’s Sriperumbudur and was later cremated at Veer Bhumi on the banks of the river Yamuna.

The Congress president Rahul Gandhi said that Rajiv Gandhi was a “kind, gentle and affectionate man”, whose untimely death left a deep void in his life.

“Rajiv Gandhi was a kind, gentle and affectionate man whose untimely death left a deep void in my life. I remember the times we had together and the many birthdays we were lucky to celebrate with him when he was alive. He is greatly missed, but his memory lives on,” tweeted by Rahul Gandhi.

Prime Minister Narendra Modi also said that Rajiv Gandhi would always be remembered for his efforts towards nation.

Prime Minister tweeted, “Tributes to our former Prime Minister Shri Rajiv Gandhi Ji on his birth anniversary. We remember his efforts towards the nation.”