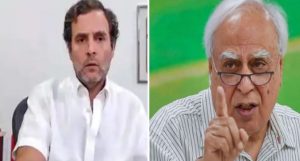 Congress party chief spokesperson Randeep Singh Surjewala on Monday clarified that the former Congress chief Rahul Gandhi has not made any comment like ‘colluding with BJP’ nor he said any word of this nature. Surjewala also asked former cabinet minister and senior Congress leader Kapil Sibal not to be misled.

“Sh. Rahul Gandhi hasn’t said a word of this nature nor alluded to it. Pl don’t be mislead by false media discourse or misinformation being spread. But yes, we all need to work together in fighting the draconian Modi rule rather then fighting & hurting each other & the Congress,” Surjewala tweeted while quoting Kapil Sibal’s tweet.

Earlier in the day, Kapil Sibal in a tweet had said, “Rahul Gandhi says we are colluding with BJP. Succeeded in Rajasthan High Court defending the Congress party. Defending party in Manipur to bring down BJP Government. Last 30 years have never made a statement in favour of BJP on any issue yet ‘we are colluding with the BJP!'”

Later Sibal deleted his tweet and said, “Was informed by Rahul Gandhi personally that he never said what was attributed to him. I therefore withdraw my tweet.”