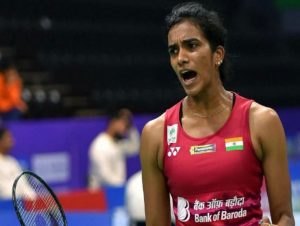 In a well fought semifinal, PV Sindhu beat Japan’s former world number one Yamaguchi by 21-16, 24-22 to reach the finals of the World Badminton Championship.

“We know each other’s game, we play very often, we played at the All England Championship. So we needed to be patient and consistent to win. I was prepared for long matches because both Yamaguchi and Okuhara are very good players and can go on and on in the rallies,” Sindhu said.

“It was a good match overall. I hope this time it would be a better result than the last time. I have to prepare well for tomorrow, so it’s not yet over,” Sindhu said after the match.

Sindhu will meet her Rio Olympic opponent Carolina Marin of Spain in the title match tomorrow.