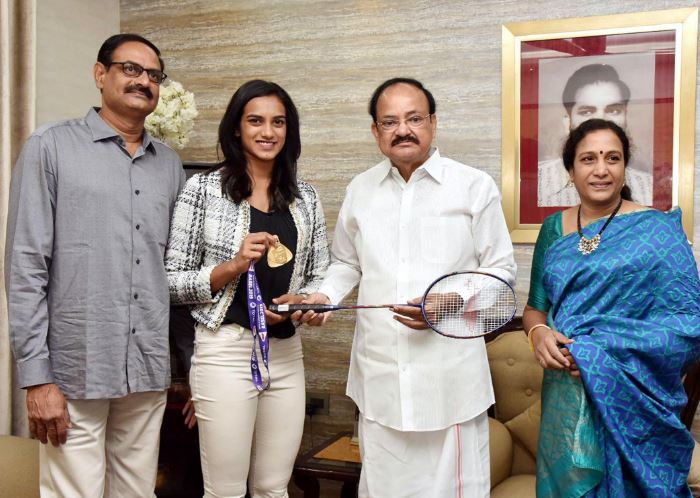 Vice President M Venkaiah Naidu has said PV Sindhu is the pride of the nation and that athletes like her are role models for the youth.

He spoke to the media on Saturday at his residence in Hyderabad after PV Sindhu, the BWF World Champion and the first Indian to win the gold, called on the Vice President along with her parents.

Hailing the hard work, dedication, and commitment of the 24-year-old Badminton star, he said that she was a great inspiration to all the countrymen.

Complimenting Sindhu for following strict diet and undertaking rigorous and disciplined practice to achieve her goals, Naidu said that the Fit India call given by the Prime Minister, Narendra Modi should become a national movement. ‘Fit India is apt, timely and most needed’, he added.

The Vice President said that India has a great demographic dividend with 65% of its population below 35 years of age and observed that it was necessary to have a healthy, active and productive young work force to take the country to greater heights.

The Vice President said efforts such as Fit India are extremely relevant at a time when non-communicable diseases are on the rise due to modern lifestyles and dietary habits.

He pointed out that fitness of the body and mind would not only keep individuals alert and smart but would also give them strength to achieve their goals and become true assets to the society.