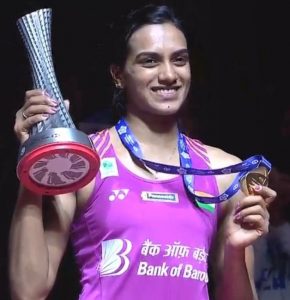 PV Sindhu on Sunday became the first Indian to win the season-ending BWF World Tour Finals tournament. Sindhu claimed a 21-19, 21-17 win against the Japanese Nozomi Okuhara in the title clash in Guangzhou, China.

Sindhu put in a brilliant all-round display to give no chance to Okuhara in the final. The World No 6 won the finals outclassing Nozomi Okuhara in a scintillating encounter that witnessed the year’s 8 best players fought for the coveted title.

While speaking to media after the tournament, Sindhu said, “People always ask me that i don’t win the finals but here I am, I have won the gold and proud of it.”