The administration is being blamed for the coronavirus spread as it presides over the official and cultural gatherings in its bid to project normalcy in the former state, reports RIYAZ WANI 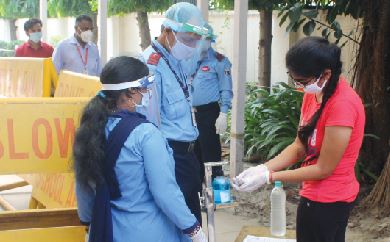 The daily tally of Covid-19 cases in Jammu and Kashmir is already twice the peak of last year. The surge, in part, is blamed on the administration presiding over the official and cultural gatherings in its bid to project normalcy in the former state, more so in Kashmir Valley.

Over the last month, the administration has held two music shows, one attended by the Bollywood biggie Badshah and two fashion shows. Besides, the government has been blamed for encouraging the tourists — both from J&K and outside the region — to flock to the Valley and also to Srinagar’s famous tulip garden, Asia’s largest.

On April 18, the administration imposed a night curfew to rein in the runaway Covid-19 infection. But the problem with this measure is that the conflict-ridden region has no nightlife. Markets close at 8 pm — earlier now in the fasting month of Ramadan- and the streets become deserted.

And while there’s night curfew, it is business as usual in the day, with no check on tourism. According to the Valley’s tourism department, 1.13 lakh tourists have arrived in the Valley since December. And this has been hailed as a positive development.

“We were happy at the sudden rise in tourist arrivals. This has been a boon for the battered sector,” said Nasir Shah, a major travel and tourism operator “People associated with the trade who lost jobs during the lockdown are getting these back. Renewed Covid-19 spike is threatening to play spoilsport again”.

But while tourism has been a boon, it has also been a bane so far as the renewed spread of coronavirus. The alarming rise in infection, experts fear could be due to mutated strains of the virus detected in states like Maharashtra.

According to the official estimates, the travelers and tourists who arrived in Jammu and Kashmir during the first three weeks of April account for 35 percent of the total infections recorded in the region during this period. The data shows that 3606 travelers and tourists have tested positive for the viral infection in April so far in J&K, 1593 of them alone in Srinagar. In March too, the percentage of Covid-19 positive travellers is more or less the same. This is seen as the reason why for much of March, 81 percent of the total Covid-19 infections in the union territory were reported from Kashmir valley, official data shows. This has forced the administration to order Covid-19 tests of even those travelling to Kashmir via road. The administration has also announced that there will be mass vaccination of hotel staff across Kashmir Valley.

But so far this has made very little impact. The cases are registering a new record every following day. Night curfews will make a little dent in the numbers. And afresh lockdown will wreak havoc with the economy already reeling from successively extended closures of businesses since August 5, 2019.

According to Valley’s business bodies like Kashmir Chamber of Commerce and Industry (KCCI) and Federation Chamber of Industries (FCIK), the Valley’s economy suffered a cumulative loss of more than 50,000 crores during post Article 370 move lockdown.

Sectors like tourism, one of the mainstays of the local economy, came to a standstill. This hit the hotel industry and the travel operators hard. The handicrafts sector was crushed. The fledgling IT industry and the start-ups were temporarily wiped out. Horticulture, a 6500 crore industry, that employs more than three million people, struggled to find takers for its produce.

But towards the end of the last year, things started mildly improving, more so in tourism. The sector saw a sudden turn for good after holidaymakers started arriving in droves, a direct result of the continuing ban on international travel. According to tourism department figures, out of an available 1800 hotel rooms in Gulmarg, Kashmir’s winter wonderland, almost all of the rooms were booked till the end of March. The Valley’s tourism department was looking

forward to more tourist arrivals in spring and summer. With tourists returning, the allied sectors like hotel industry, handicrafts started reviving too.

With peace also holding, the government seized upon the resumption of tourism to showcase normalcy, in part to lend legitimacy to its decision to revoke J&K’s autonomy in 2019. So, to further promote tourism, the administration tried to reinforce the image of Kashmir’s normalcy by holding cultural events and hyping tulip garden up as a big draw for tourists.

Official figures from the Directorate of Forticulture reveal that more than 2.15 lakh visitors — both tourists and locals — arrived in the iconic garden during the first 22 days. The number since has reduced with the surge in the infections discouraging local residents from visiting. Ditto with tourists, whose inflow has started tapering with each passing day.

Kashmir certainly needs an extended period of heightened tourism and business activity to make up for the lost time. While tourism has certainly had excellent four months since December, the other businesses are still reeling. One reason for this was the exceptionally harsh winter with temperatures plummeting to minus 9 in January. So, the spring and the upcoming summer was expected to shore up the other sectors. No longer, as renewed Covid-19 surge threatens to overwhelm the Valley once again. And if it doesn’t self-limit, the administration will have no option but to impose strict restrictions on movement. Already, the government has closed schools which have already not been functioning since last two years.

Now the question is whether the administration played an unwitting role in facilitating the fresh Covid-19 spike in the Valley? There’s reason to believe that the gatherings attendant on cultural events did lead to new infections, so did growing tourist inflow who are said to have brought mutant strains to the Valley. With some stricter exercise of SOPs, the administration could have prevented it. But all is not lost still.

“The gatherings, both official, cultural and religious, should be discouraged,” read an editorial in a Srinagar daily. “This alone can reduce the cases to manageable levels and eventually enable government reign the contagion in”. But this can hardly happen if the government continues to organise cultural and religious events, more importantly, the upcoming Amarnath Yatra. The registrations for the annual pilgrimage that brings over half a million pilgrims to the Valley have, however, been temporarily suspended. But the administration doesn’t appear inclined to cancel the yatra, as of now.

“This normalcy flaunting by the administration in the middle of a pandemic is now taking a toll on the health of the people,” says Naseer Ahmad, a columnist. “In just three weeks, the number of Covid-19 cases is almost twice the peak of last year. The tally is set to rise further if the government doesn’t make a response to pandemic subservient to its political agenda”.

One killed by three Nihangs in Amritsar 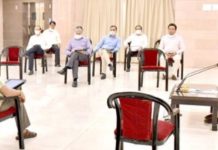