A leader belonging to Shiv Sena was allegedly shot dead by three people in Punjab’s Gurdaspur on Friday evening.

Ajay Thakur 25 was shot dead when he was about to board a bus from near the bus stand in Purana Shalla area.

Three youths, who have been identified, came on a motorcycle and one of them pulled out a gun and shot Thakur dead from point blank range.

Thakur was rushed to a hospital where he succumbed to his injuries, the police said.

SSP Swarandeep Singh said, “preliminary investigations revealed that the accused had a dispute with Thakur over some issue.

Singh further said, “the three accused will be arrested soon.”

A case has been registered and an investigation into the matter is going on, the SSP added. 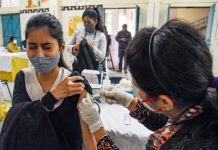