Those arrested were Shahid Qayoom (22) and Fazil Bashir (23), students of St. Soldier College of Engineering and Technology, Jalandhar.

An FIR under various sections of the IPC has been registered against them.

The outfit is headed by Zakir Rashid Bhatt alias Zakir Musa, who masterminded and guided the attacks.

According to Punjab Director general of police (DGP) Suresh Arora, four persons were involved in carrying out the hand-genade blasts in the police station. The other two Mir Ravoof Ahmed alias Rouf, and Mir Umar Ramzan alias Gazi are still absconding.

“They were trained AGH operatives who flew from Srinagar to Chandigarh on September 13, with the sole purpose of carrying out these attacks,” DGP added.

“Investigations so far have revealed that AGH’s recruiter Amir of Dada Sara Tral in Kashmir had contacted both the students when they were in Kashmir and exhorted them to work for AGH. Shahid and Fazil were in contact with the leaders of the AGH outfit over different chat applications,” DGP said.

The DGP said, “Rouf and Gazi, along with Shahid and Fazil, carried out a recce of the police station and nearby areas on September 13.”

“On September 14, around 7.40 pm, the four conspirators hurled four grenades at the police station and fled the spot. After the blasts, Rouf and Gazi boarded a bus for Jammu and Kashmir from Jammu Counter and fled Jalandhar city,” Arora said.

The DGP said Punjab Police were working closely with their Jammu and Kashmir counterparts and intelligence agencies to arrest the remaining terrorists and unmask the entire conspiracy and network built by these outfits.

The DGP also appealed to the student community in the state not to fall prey to the designs of militant elements and anti-national forces.

This is the second case of arrest of Kashmiri students linked with AGH in Punjab.

The police had last month arrested three Kashmiri students from the hostel of CT Institute of Engineering, Management & Technology, Jalandhar, who had links to AGH and other active militant groups in Jammu and Kashmir. 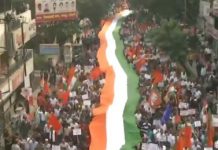